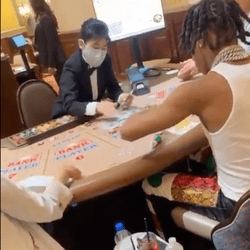 Huge international star, Drake particularly likes to bet his money. In fact, he usually streams some of his gaming sessions on the excellent online casino Stake (read below).

Well, he’s not the only rapper to indulge in all kinds of betting. His partner on the hit song Yes Indeed is also an avid gambler.

A few days ago, Lil Baby made a great performance around a traditional table dedicated to baccarat. Indeed, he managed to win more than a million dollars in a hotel-casino of the MGM Resorts International group.

A video shared on social networks that made the buzz

At the moment, the rapper Lil Baby is on tour with Chris Brown. His latest stop is in Las Vegas. So, last weekend, he set fire to the T-Mobile Arena filled with thousands of fans. As he was on the famous Strip, he took the opportunity to go to the VIP room of a prestigious hotel-casino with the rapper BlocBoy JB who lives in this mythical city of the state of Nevada.

During his gaming session, he played a few games on a traditional baccarat table. It was at this table that he managed to win over a million dollars. His sidekick BlocBoy JB took the opportunity to share a short video on his social networks that quickly made the buzz.

In it, he explains the superb performance of Lil Baby who confirmed the facts shortly after on Twitter.

Unfortunately, we do not know the name of the hotel-casino that hosted our rappers. However, we can see the logo of the group MGM Resorts International in the video published by BlocBoy JB. It can thus be for example the Bellagio, the Mandalay Bay or the New York-New York.

From his real name Dominique Jones, the rapper Lil Baby born in Atlanta is 27 years old. He became known in 2017 on the Youtube platform by publishing various tracks, which allows him to be discovered by Drake with whom he released in featuring his first successful track Yes Indeed. He was also credited shortly after with the very popular song Drip Too Hard in collaboration with Gunna.

READ :   The Las Vegas Strip could soon double in size

In a recent documentary entitled Untrapped: The Story of Lil Baby, it was discovered that Lil Baby was always very attracted to the world of casinos. Even before he became successful, he used to gamble.

His sister tells an interesting story. She once lent him $60 so he could go to a casino. When he returned, Lil Baby was no less than $100,000 richer. He had mainly won all this money on a traditional table dedicated to a dice game. It is safe to assume that it was craps, which is very popular in the United States.