When Eiyuden Chronicles: Hundred Heroes, an old-school JRPG led by Yoshitaka Murayama, dad of the cult Suikoden, was announced, let me tell you that the temperature quickly went up a notch. Drooling, fans and the curious rushed to Kickstarter to the point of offering more than 3.5 million euros to the project. Unfortunately, some time after development began, Hundred Heroes was pushed back to 2023, leaving players on the hook. However, to make them wait, a prequel, Eiyuden Chronicles: Rising, is being worked on to serve as an appetizer before the main course. But will we still be hungry by then? 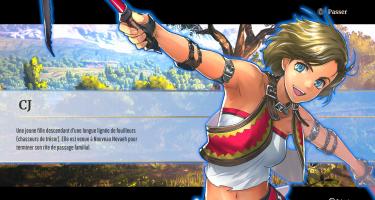 Eiyuden Chronicles: Rising shares the same universe as the future Hundred Heroes. According to the developers, with Rising we’re supposed to soak up the lore, meet characters from EC: Hundred Heroes and enjoy the art direction. If the last point is certainly accomplished, the first two, on the other hand, will remain a little in suspense.

EC: Rising catapults us into the shoes of CJ, a bubbly young woman of about 16 – cliché you say? – came get lost in the small village of New Neveah with the sole purpose of finding treasure big enough to bring him back to his people as is the coming-of-age custom. Bad luck for her, the village suffered very significant damage following an earthquake and half of the houses were destroyed. She will then have no choice but to help the local population to carry out her quest. 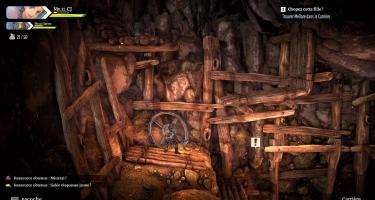 Fortunately, along the way, she will find two sidekicks: Garooa mercenary kangaroo, and Isha, the acting mayor with insane magical powers. It is between them that they will raise New Neveah and much more, during almost 22 hours of hard work making 35,000 round trips collecting no less than 60 tons of materials, from the simple nut to the legendary tree branch, passing through heaps of precious stones. We will obviously come across a lot of characters, which we assume will be important in Hundred Heroes, but that’s about all. 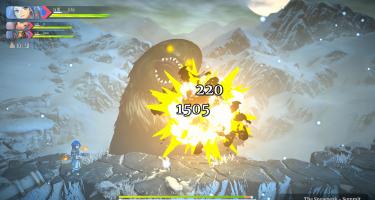 Because yes, the frame of Eiyuden, sewn with cottony white threads and decked out with dialogues halfway between silliness and a children’s story, finally asks us only one thing during more than 20 hours of play: pick up stuff and deliver other stuff to build stuff. Yes, that’s a bunch of stuff.

The problem is that in addition to offering a very basic story, of which the stakes wait for ages before setting themselves up for finally not much. And the narrative is chopped up by fixed reward screens every time you gain xp, money, level up, complete a quest or start a new one, etc. Result, we often remain frozen for several minutes in front of our screen, chaining dialogues from pre-teen manga, while cashing in the systematic stops as soon as a pop-up window appears on the screen with music “tintin tooudou tintou tintinnnnnn!! !!» as soon as you unlock something. Quickly, it becomes simply unbearable. We would almost come to regret the combat recaps of the JRPGs of yesteryear.

Eiyuden Chronicles: Rising has us in awe

A Fed Ex simulator but without Sam Porter Bridges 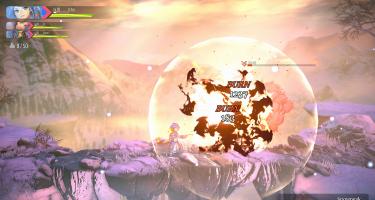 We (re) immerse ourselves in the JRPGs of the 90s, it is moreover a bit the objective of the license of Eiyuden Chronicles. From the launch of its Kickstarter, EC: Hundred Heroes does not hide it and already announces itself as an old-fashioned Japanese RPG with a few hints of modernity. Rising, as a prequel, does the same and plays the retro card, but trades the traditional role-playing game for light RPG action in horizontal scrolling.

So we end up with a visually very attractive 2.5D software. The characters (friends and enemies) are all in pixel art and benefit from special care, while the environments are drawn and painted by hand in addition to being in full HD. This gender gap, already seen elsewhere, remains quite rare and works very well. As a bonus, EC: Rising benefits from a successful artistic direction and a character design mastered from start to finish. We will nevertheless pester on the banality of the bestiary and the excessive recycling of its models which spoil the party. For the rest, it is visually very solid, colorful, fresh and attractive. Plus, it’s inevitably reminiscent of the JRPGs of the days when our characters animated on ultra-detailed fixed environments, like in Final Fantasy for example. 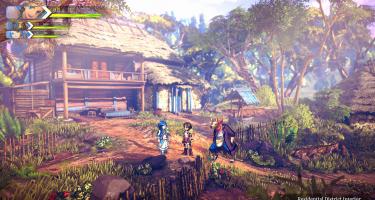 On the gameplay side, EC: Rising aims to be a jack-of-all-trades, JRPG, dungeon crawler, 2D action game, Metroidvania… but ultimately does not exploit the vein well. For example, we have the right to management bases asking us to rebuild a small village to fill it with shops and bring in people, but the execution is ultra smooth. In the end, all you have to do is talk with a horde of NPCs who don’t have much to say, collect resources, bring them back to them and get an adventurer’s card stamped. It will be the same for the “craft”, allowing us to improve our equipment, or the unlocking of accessories. It’s all about money and resources and you will have to lug around the same dungeons again and again to collect 2-3 materials.

Many, many quests that take us all for a UPS delivery man

Same story for quests, which use and abuse round trips to overdose. For example, it is not uncommon to have to do 5 or 6 races to unlock a new area and that once arrived in it, we are asked to turn back 3 or 4 times to truly unlock it. And the thing is, the studio pulls the string until it breakssometimes going so far as to ask us to walk through a dungeon for long minutes to finally block the progress of the plot and make us do 10 additional harvest missions to unlock the path. On top of that he tries to bring a note from Metroidvania by asking us to improve ourselves in order to keep moving forward and access new paths, except that for us, it’s nothing more or less than additional round trips. Still and always.

The problem is that the game starts very very slowly. It will take you a good 3 hours to start unlocking new moves, shops to buy items and upgrade your gear, and enough dungeons to no longer have the feeling of stupidly farming the same Great Forest, the first dungeon of the software in which we will come back around 400 times to pick up branches, nuts or find chests which will appear as if by magic because a quest takes you there will have said. 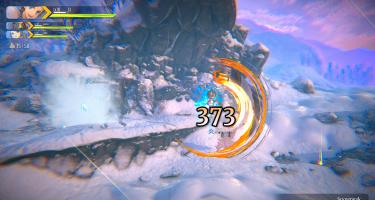 The other concern is that the level design is absolutely nothing specialit is not even frankly at the level. Where the art direction blew us away, the dungeons have an extremely flat and linear structure and fail to stimulate attention over long play sessions.. We go straight ahead discovering checkpoints, a handful of not really useful shortcuts and that’s it. There are a few enemies placed on the way to try to spice it up a bit, but since we have, at the very least, 250 quests to do, we quickly find ourselves far too powerful for them. monsters of the same level as us, and even for those who have 5 to 10 more elsewhere, bosses included. The combat system, meanwhile, even if it is expanding little by little (far too slowly by the way), does not add more salt since it is based on three keys, one for each character, and that the combos can be counted on the fingers of one hand.

However, with a group of three playable heroes, we would have expected a bit deeper mechanics, but no. Here, each character has a special ability (a dash, a guard, a spell) and a strike key. We can nevertheless make a “link attack”, by switching from one to the other just after a blow, to trigger a small animation causing great damage, but that’s about all. Enemies explode on impact, bosses crunch and sometimes don’t even have time to do a signature attack. In short, it’s not folichon and we quickly go straight at full speed.

But we want more?! 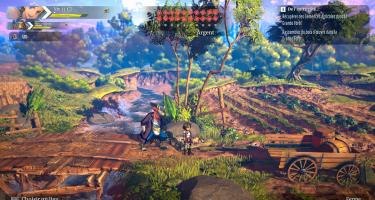 I think that to fully appreciate Eiyuden Chronicles: Rising, you have to play it on the go, in small bits. Do a few quests here and there, or even collect resources during the lunch break, otherwise the redundancy points (very/too) quickly the tip of his nose. While casually the software has a taste of coming back to it, in particular because of its shimmering graphics, but also precisely, because it is an ultra accessible software, without the fuss, super fresh and ultimately pleasant.

We still take a certain pleasure in tracing in the dungeons as quickly as possible by taking advantage of the OST whose themes ring true and are even very pleasant, even if they are also used in a loop and excessively here. On short sessions, it goes without problem. So we have fun doing side quests to collect stamps as rewards, improve our heroes, the village, etc. And as a bonus, the dialogues are so anecdotal (for the additional content) that you can easily do without them without missing anything. So yes, Eiyuden Chronicles: Rising is not perfect, certainly will not be very exciting for the most intransigent, but it is a small air bubble that feels good and a very good appetizer while waiting for Hundred Heroes which should show up by 2023.