Published by Nacon and developed by Cyanide and Leikir Studio, Rogue Lords is a rather special roguelike. Since, this time, you are not the hero but the villain of the story and as a bonus, you have nothing to do with the rules of the game. After all, the devil is you. 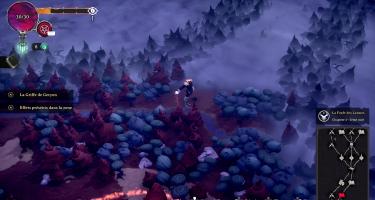 Forced to go to hell in hell because of Van Helsing, famous monster hunter, the devil begins to pump the souls of the deceased from his prison in the hope of regaining enough energy to take revenge. Except that ten years after being forced to flee the earth, souls suddenly stop descending into hell. The devil then decides not to wait any longer and to come out of his lair to harvest them himself and take revenge on Van Helsing. This is where you come in.

Where usually we are content to be on the right side of the fence by decimating hordes of demons, in Rogue Lords, the evil demon is us. The software therefore plays the card of originality and puts us in control of Lucifer in person. To carry out his conquest, the latter calls on illustrious disciples, each more demonic than the other. We can thus recruit well-known characters from tales and legends such as the Headless Horseman, Dracula, Frankenstein or Lilith.. Each of them represents a particular archetype (tank, mage, support…) and has unique skills. 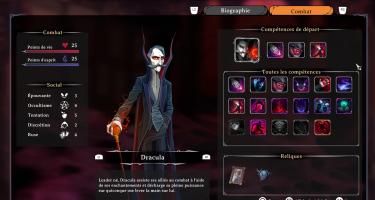 The Headless Horseman, for example, is a formidable tank capable of taking heavy damage, provoking his enemies or buffing himself to become even more resistant, while Bloody Mary, on his side, has more complex abilities allowing in particular to debuff enemies or multiply the effects of her skills by using a broken mirror capable of duplicating all of her mistress’ attacks. It’s only a shame to only have access to 9 anti-heroes, where the software would certainly have benefited from having a much larger roster.

Nevertheless, that does not prevent Rogue Lords from offering a rather fresh and light pitch, narrated by many lines of dialogue and an effective voice-over. Everything is pleasantly transposed to the screen thanks to a high-flying artistic direction. Moreover, Rogue Lords may well be a bloody tale full of monstrosities, but it is still a relatively colorful soft overflowing with artistic inventiveness, especially in terms of character design, and the world in general, which is almost eyeing to the cartoon. It’s a real treat for the eyes, even if the technique is sometimes a little tight, with, for example, textures that aren’t always at their best when moving around the world map. For the rest, it’s flawless.

In Rogue Lords, the evil demon is us 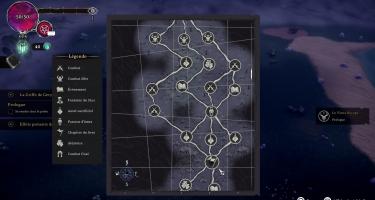 Your objective will therefore be to perform several runs (called here volumes/books) to get your hands on 6 precious relics essential to your victory. For each attempt, you can bring 3 characters with you.

Right here, no gear, no leveling or even post-launch prep, all your runs will start the same in true roguelike lore and death is final, forcing you to restart the tome from the beginning. Your followers will only have a handful of basic skills on them that you will need to improve during your game via NPCs or events, for example. Their statistics will also all be the same at the start and it will never be possible to improve them permanently to benefit from them in the following runs, unlike the progression systems offered by the roguelites. Rogue Lords is more in line with a Slay The Spire or a Binding of Isaac, where each run is unique and starts at the bottom of the ladder. However, you will be able to unlock several characters, as well as advanced skills that you will find directly in the missions at random. 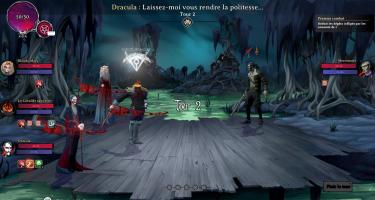 At the start of a new game, we start from scratch the volume chosen and a map with several branches takes shape. If usually we are used to dungeons made up of several rooms full of enemies and traps, in Rogue Lords the dungeon is a “region” and the rooms are “nights”.

The operation, however, remains the same. We advance in the map location by location, and have to face several random events on the way. Just like in Slay The Spire Where Darkest Dungeoneach step towards the final goal is synonymous with difficult choice that can have a considerable impact on your progress. Rogue Lords also offers many different events. In addition to the fights, it will for example be possible to find Steles of Sacrifice allowing us to modify our skills, merchants who can sell or improve our powers, or even characters with whom we will have to interact to increase our statistics and trigger various events. . 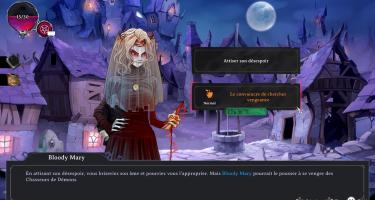 In any case, every time, it’s up to you to choose how to act, approach situations and in which direction to go. The random also has an important part in the soft, as in all games of the genre, and it will then be necessary to think carefully before making any decision. The most convincing example is undoubtedly the exchanges with the locals. Before each event, you will be able to choose the character who will speak and try to influence the events. A cutscene will then detail the situation and give you the choice between several actions. Generally, there is always a neutral one, without cost or gain, while the other two offered will offer greater rewards, but also the possibility of taking a penalty in the event of failure. It is in moments like this that the RNG comes into play, the probability of success of which is indicated with a gauge. And it is especially in these circumstances that your devil’s gifts will be useful to you.

I’m the devil, I do what I want, but please don’t hurt me too much 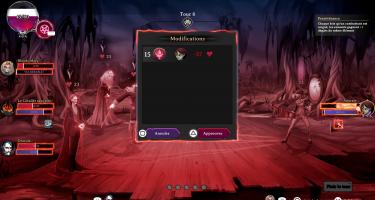 One of the great strengths of Rogue Lords, and what sets it apart from the competition, is thatas the devil you can break the rules of the game. At any time, you can use your power to touch almost anything. On the map, for example, you can create portals allowing you to skip entire sections of the region, or during dialogues or decision-making you can influence the results by artificially increasing your chances of success. Even during fights you can play the spoilsports, by exchanging buffs from one character to another, by restoring life to your characters or by directly weakening your opponents by transferring your penalties to them or by directly reducing their bar of life.

The possibilities of “cheating” are very numerous, but also very expensive, since each action will eat away at your vital essence and if the latter drops to zero, it’s guaranteed game over. But sometimes the risk is worth it and, honestly, it’s even kind of fun to feel all-powerful breaking the 4th wall.

However, it will be necessary keep an eye on the vital essence gauge so you don’t get sent back to hell too quickly, especially since this energy is also used to protect your followers in combat. During clashes, each of your acolytes has their own bar of life and spiritual energy (which they use in particular to cast certain spells or protect themselves), and once one of them is empty, it consumes your energy. diabolical with each blow received. It can therefore very quickly turn against you and end badly, especially since the fights, which take place on a turn-based basis, are as strategic as they are difficult. 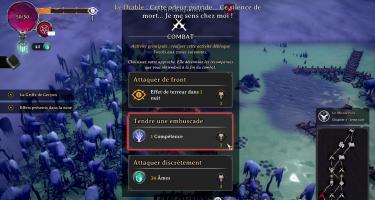 Each round you have a handful of action points to use as you see fit using the skills of your allies. For example, you can play with your 3 heroes using one or two abilities each time, or on the contrary use only one and let it do the work like a grown-up, it’s up to you to see which is the best solution.

It must also be taken into account that each power has a higher or lower cost in action points and above all, that your skills never recharge on their own from one round to the next. It will be mandatory (except in exceptional cases) to use the reload capacity of your heroes so that they can recover and reuse their spells. This silly mechanic brings a big dose of extra strategy. It is clear that if you are used to turn-based combat, you know that you have to know how to manage positive (regeneration, protection, etc.) or negative (bleeding, burning, poison, etc.) statuses, take advantage of the strengths and weaknesses of each character (friend or foe), and obviously anticipate his actions. Except that in Rogue Lords, the anticipation is forced. By blocking our skills and forcing us to use action points to recharge them, the software pushes us to constantly think about the course of the next 2-3 rounds and to juggle between our characters. The fights then become real puzzles, and it is strongly advised to take advantage of the battles won in advance to get used to this cerebral gymnastics otherwise, when the going gets tough, you will get knocked out. And, believe me, when Rogue Lords decides to put you in the face, it succeeds without difficulty.

If our characters, our skills and our basic powers never evolve definitively, the difficulty increases significantly as you progress through the volumes. It’s quite simple, the software is already difficult during the first 3 books, but from the 4th, it’s a real die & retry. Every decision counts, the fights are all cut throats and it will be impossible for you to advance without being fully focused. Challenge lovers will be delighted and will certainly have something to do with white hair. There is indeed a difficulty mode lower than the “normal” mode, but it will ultimately only postpone the inevitable by a run or two maximum.