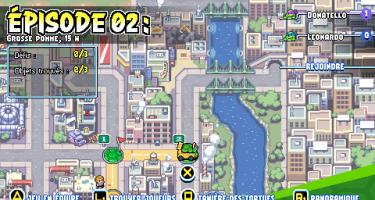 The TMNT saga was launched in 1984 via a comic book dedicated to it created by Kevin Eastman and Peter Laird. The phenomenon was considerably amplified thanks to the mythical cartoon of 1987 which popularized our four turtles. This was followed by a large number of derivative products and video games inspired by the license, with more or less marked success. And this time, it’s up to Tribute Games and DotEmu who have the heavy task of keeping the Ninja Turtles legacy aliveBy offering, with this TMNT Shredder’s Revenge, a Beat’em up that has for mission to entertain us and let off steam, while remaining faithful to a universe that has accompanied the most seasoned, or old, of us. So, a successful bet? 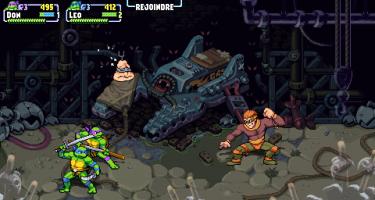 As suggested by the various previews (trailers and other screenshots), the developers have tried to faithfully reproduce the essence of the mythical anime of 1987. And what better way to put us in the bath than an intro that suggests this generic so characteristic of the cartoon. But, if one wants to be picky about it, one could deplore the absence of a French version – for the rest, the software is fully translated. It doesn’t matter, we’ll just replace it with our humming to give the feeling of a 30 years jump back in time. A small pleasure which is not refused and which has the merit to give the tone.

… the developers have made every effort to faithfully retranscribe the essence of the mythical 1987 anime. 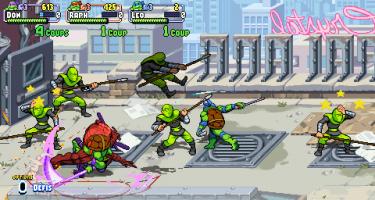 Once this is done, we are in the menu, which is not a frill, with a story mode and an arcade mode which will represent the main part of our adventure. The first one uses the good old family map which will inevitably remind you of the NES version. In this one, you will unlock places as you progress and, of course, you can move around at your convenience or follow the narrative – which we don’t need to go into, eh. You can also perform small side quests to unlockwhich are often based on “find all the hidden objects and you’ll win a crazy thing”.

The second mode will offer you more or less the same thing, except that you link levels the old fashioned wayone after the other until the famous Game Over. This is the most challenging mode, but we’ll come back to that later.

A classic but extremely neat structure 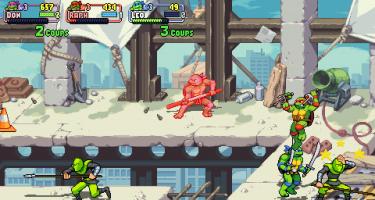 Let’s be honest, in case you still doubt it, the software does not revolutionize the structure of a classic BTU. The goal is always to go through the different tables (16 in total) to inevitably end up facing a boss, chosen among the most iconic villains of the saga: Bebop, Rocksteady to name but a few. For the others, we leave it to you to discover them.

READ :   2K Games will discontinue two of its WWE games

The whole is embellished with overboard phases to break the monotony, but the main part of the adventure will be concentrated on the combat phaseswhich, fortunately, are deep enough and renew themselves enough to not to see the boredom in the middle of the adventure. Adventure that between us is said, will not take no more than 2 hours to complete anyway.

Adventure that between us be said, will not take more than 2 hours to be completed anyway. 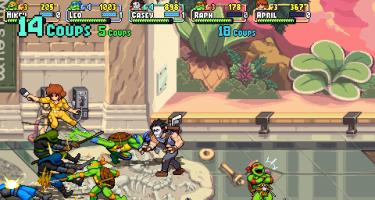 A sufficient amount of time, however, to discover that all the environments of the anime are faithfully representedin pixel art of course to revive the heart of the nostalgic. It was a rather risky choice, but it pays off, so much its passionate developers struggled to give life and authenticity to the wholeIt’s just a shame that these places don’t offer enough interaction. We can easily recognize familiar places like the roofs of New York, the streets, the TV studio, the zoo, subtly accompanied by nice musical compositions created by Tee Lopes for the occasion. You’ll even have the pleasure of taking a little trip to another dimension to beat the crap out of Crank’s old softened brain.

A gameplay richer than it seems 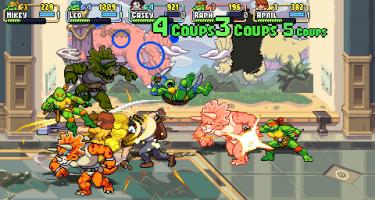 On the casting side, no bad surprise on the horizon either, since you’ll have the chance to choose from a large roster. For, in addition to our four turtles (Leonardo, Donatello, Michelangelo and Raphael), the developers have also integrated Master Splinter, April and Casey Jones – who unlocks at the end of the scenario.

Or 7 playable characters who will not be simple interchangeable skins. Each of them adopts different techniques and weapons that offer as many gameplay possibilities. To materialize this, the attributes are divided into three categories: range, power and speed.

… master all the facets of a gameplay that, under its simplistic appearance, is technical enough to provide a consistent dose of fun. 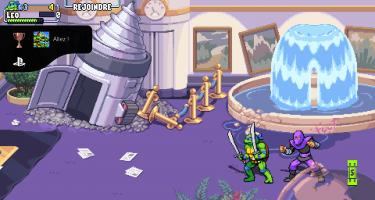 It’s up to you to put all this to use depending on your play style and how you want to approach the adventure. The constant stream of enemies coming at you will do the rest, the henchmen of the “Foot” clan in the lead, since they will be your main opponents with a few exceptions. Fortunately, they adopt different color codes depending on the attacks they inflict – shield, ranged attack, charge, throw. So it’s up to you to adapt and manage them in order of priority. The bossesoffer many combat situations without being very varied in terms of patterns. They are often content with two or three looping attacks, in addition to summoning henchmen.

And, to take out all these nice people, you can count on actions like the dash, grabs, normal moves, jumping moves, charged moves, deflections, not to mention special attacks which can be unlocked via a combo gauge.

This is where you will be asked to master all facets of a gameplay that, under its simplistic appearance is technical enough to provide a consistent dose of fun. Of course, you can just jam the action button and get through the levels without too much trouble, but the fun will be less.

A crying lack of challenge though 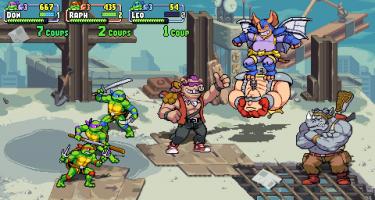 As you probably know by the way, the adventure can be played with up to 6 players, locally or online. It will be better to play “clean”, as the action can quickly get confusing on screen when everyone is on the go. Between the projections, the number of characters displayed and the various pyrotechnic effects, it is sometimes difficult to find one’s way through this mess. And you regularly lose sight of your character… It would have been wiser to limit the number to four, that would have been more than enough to provide fun without turning into a street fight mush.

… it’s almost a pity that the software doesn’t make the test a little more challenging. 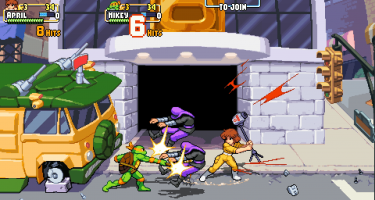 A concern of readability that will not affect the pleasure of playing, moreover TMNT does not hesitate to multiply the winks to its elders, TMNT: Turtles in Time first. The fighting phases are pleasant and punchy, thanks to a careful sound design and impeccable animations. It’s also fun to throw your opponents out of the camera.

In the end, it is almost regrettable that the software doesn’t make the attempt a little more challenging. You will inevitably have to go through the arcade mode and put the cursor on the highest difficulty to get a few sweats and earn our share of pizza at the end of the game. Because, in this one, the game over takes you right back to the beginning of the adventure. Fortunately, some optional challenges are there to spice up the challenge and offer a very appreciable replayability.