Anuchard, out April 21 on PC, Xbox and Switch, is a classic game. With its look and its retro mechanisms, it intends to send us back to the past and make us live an adventure such as we could then approach. And, this title developed by stellarNull and published by Freedom Game, is friendly. Certainly. But the fact remains that the experience it provides remains very common and is devoid of the few spices, if one dares to say, which could make it a much better software and thus take it out of the category of anecdotal title. 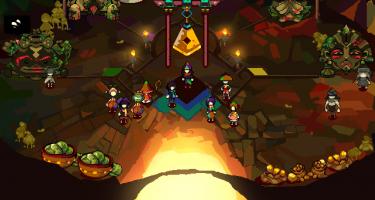 When the adventure opens, you are propelled into the skin of a young girl whose destiny is to become the heroine who will once again bring glory to the continent of Anuchard. And, from the very first moments, she already finds herself in the middle of a fight. She fights, struggles, but nothing helps, she is quickly dominated. Fortunately, it was only a dream or, rather, a taste of his near future and his upcoming responsibilities. Because, yes, your character is the chosen one who will once again have to bring prosperity to dying lands lacking a whole host of resources, food and others. It is that since the departure of the five guardians who brought their protection to the kingdom, nothing is going well. The inhabitants try to live as best they can, without doing more to improve their daily lives. They live without living. In short, they survive.

But this state of affairs is about to be overturned. Inevitably, circumstances will lead the heroine towards the object which will designate her as the hope of an entire people: the bell of Audros. It is the latter that will give him the appropriate powers to venture into the various temples, places in which live those who can restore his greatness to the world as it once was. And that’s not all. Goalies aren’t your only goal. You will also have to deliver the souls of individuals, fellow citizens or not, imprisoned in these dungeons.. Not to usefully serve the story, no, because all things considered, their presence seems quite useless, but to, it seems, instill pathos and therefore seek to move. However, it is difficult to say whether it succeeds or not. It all depends on the disposition of the player.

The story, without being transcendent, is correct. She’s not unpleasant, but she’s not the most perfect either. In fact, as you will have seen above with the description of its introduction, the title presents a plot that could not be more common which, in appearance, takes up elements worthy of the fable. It is about Man and all that characterizes him: selfishness, greed, etc. However, despite the themes addressed, humor has its share of presence. Or, at least, he tries to settle down and he can hit the mark. But again, it’s a matter of personal taste. And even, it may well be that a less satisfying feeling arises when you see all this little world bustling before your eyes.

Despite a world full of color, Anuchard transmits something deeply pessimistic.

The characters, in fact, will have a hard time charming you with their characteristics. It’s exaggerated for comedic purposes, that’s for sure. Nevertheless, big problem: there are some clumsiness in the realization. Instead of making characters endearing by their stupidity, for example, the game manages to make them contemptuous. But, maybe that was one of the goals? Of the genre, showing the ugliness of a human species filled with duplicity, carrying a certain ecological morality… Without affirming anything too much, we would be of the opinion that we acquiesce. Cynicism seems to be a completely accepted party, especially if we refer to the final sequence. Hope to the human type is all too relative in the game.

Still, it is not very pleasant to suffer here and there lines of dialogue enjoining us to accomplish tasks in a tone more than imperative.

Dungeon after dungeon, puzzle after puzzle, save our guardians 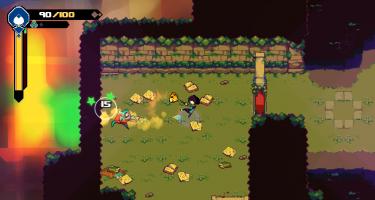 In the dungeons, which you will therefore have to discover, your journey will be punctuated by two things: combat and the solving of puzzles which, overall, simply boil down to activating switches in order to free the doors from their hindrance until you reach the master of the place. By dint, it could definitely seem like repetitive. However, some effort has been made to minimize this feeling of deja vu, or more accurately, deja vu. The player will certainly always find himself in front of the same mechanism, however the way of carrying out the action will change. If sometimes, you will find yourself facing an obstacle that is easy to overcome, other times, slightly more complex phases will present themselves to you. Complex, yes, but not complicated. Our neurons will not be overstimulated, that’s obvious. However, we can only welcome this attempt to bring a little variety during the journey inside a temple. In fact, each of these places presents an evolutionary structure. In short, if we can summarize, as you go through the 3 rooms of your dungeon, the puzzles that will be available to you will be a little more elaborate.

The fights, the experience that this Anuchard provides is quite poor.

On the other hand, the fights, it is another pair of sleeves. Enemies that suddenly appear in an area specific to combat – and which you can only get out of by eliminating your opponents – will almost always have the same look. But, their faculties, they change somewhat. As for the level of challenge they offer, it is very low. They will therefore logically not pose any major problems. However, with your combat abilities, your two techniques more precisely, it will sometimes be difficult to stand up to them.. If for some of the creatures, the simple attack will be required, for others, it will be necessary to use the most powerful to break their “shield”. And that is the main flaw. The action in question merges with another: you want to strike with all your strength, you will instead perform a roll, and vice versa. Then there is also the speed at which our character moves. Dragging her heavy bell behind her, the heroine indeed shows a certain slowness. 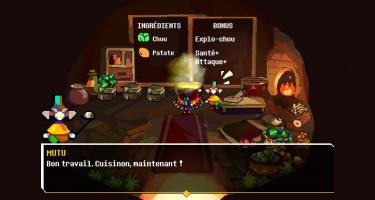 The weapon that will be used during your confrontations is unique: the bell. A very weak arsenal therefore and which is nevertheless compensated by possible improvement proposals. Once all the necessary items, you can go to a kind of blacksmith who will operate on your equipment. Well, in theory. In reality, your battle tool changes very little since the modification choices are low. Besides the bell, you can also count on an object mainly focused on healing. This is an “arrow” that you stick into the ground. While active, which only lasts for a short time, your health bar regains a much better dynamic. However, it cannot be used infinitely and several times in a row. No, there is a condition. You must fill the gauge intended for this purpose. It is only once full with the different elements (small green orbs) found by breaking boxes and cutting tall grass that you can take advantage of this famous cure. This is its basic function. And, as with the bell, this arrow can also evolve, becoming an offensive support although scanty.

In fact, when it comes to improvements, the content is much richer when it comes to more or less useful elements. Some are more like cosmetics and others such as the appearance of a new food basket will affect your abilities. Thus your endurance will be greater and your attack more effective, in particular by acquiring the possibility of reaching your target at a distance through projections.

So, pleasant this trip to Anuchard? 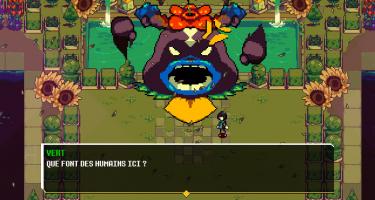 Well, given what’s been written so far, the title doesn’t sound very appealing, does it? However, is it really to be avoided? No, it’s not bad. Nevertheless, the experience is so anecdotal that you will find very little to get your hands on to achieve true entertainment.

Artistically, we will not be choosy. Even if there are sometimes some problems with relief, the 2D decorations are quite pleasing to the eye. However, when it comes to dungeons, the difference is hard to make out. The fluidity is also there, except towards the end where slowdowns are felt. And, musically, it is correct. Sometimes, as far as she is concerned, there are even some flashes with quite nice melodies. What is a little less good, however, is once again the lack of variety that we can deplore. There are only three distinct places that we barely touch on. Very few things, activities, will keep you in these different places.

To this lack of exploration are also added trips that seem more than useless. For example, you will be sent to go back and forth more than dispensable. And then there are also very classic game mechanics that might put some of you off. Among the most notable is saving: exit autosaving, to keep your progress you will have to do it manually. This will force you to go all the way, which can be accelerated using teleportation portals, to access the specific location. In addition, there is the ease of combat that we could mention a little earlier. The bosses are by no means impressive and you get to the end very quickly. But, it is still nice to see that during these confrontations everything does not come down to skirmishes. Indeed, these fights are sometimes hybrid with the presence of switches or others to be activated in order to be able to access your opponent. 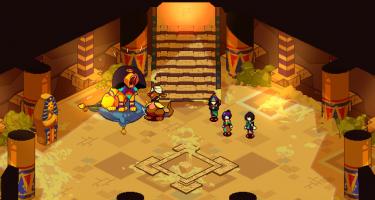 In short, it’s passable. And, you can always try to make your own opinion on the thing. However, be careful, there is a good chance that a big bug (still not corrected since) will prematurely end your journey. It occurs during a certain dialogue passage at the very beginning of your game. After passing lines of text, it will be impossible for you to make a single movement and no matter how long you wait, no improvement is to be expected. The problem? Well, it’s quite simple, it’s the French version that suddenly crashes the game. If you want to continue, you will have no choice but to head to English. From there, you can switch to the language of Molière to facilitate interactions between the various characters, although honestly, it is not very pleasant to follow their banal and long, very long conversations, especially if we take into account the short time (more than 5 hours) that we are given to play. But hey, it’s up to you.