It is very likely that the Swedish studio Image & Form don’t tell you anything. However, you may have had the opportunity to get your hands on some of their creations, and more specifically on SteamWorld, their flagship franchise based on a steampunk universe. Now part of the group Thunderful, the studio has chosen a different direction for its next game. 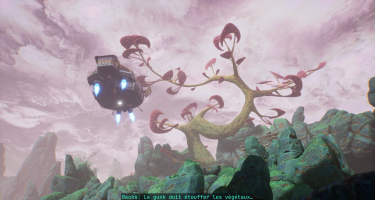 In the case of The Gunk, we change universe to immerse ourselves in the discovery of an extraterrestrial planet. No more robots and 2D graphics and make way for a 3D adventure for an action-adventure oriented game. Finally, more adventure than action all the same. Small precision that is important, The Gunk is a Microsoft exclusive, therefore only playable on Xbox Series and PC. So, is this new experience a success?

In The Gunk, you play the protagonist Rani accompanied by her sister becks. Our two friends are debt-ridden space explorers. They try somehow to make a living in search of valuable resources during their travels. The game begins when they accidentally discover an unknown planet overflowing with a potential source of energy. Promise of an adventure full of credits, they try their luck by landing in a lush area. However, the excitement of this new discovery will be short-lived. 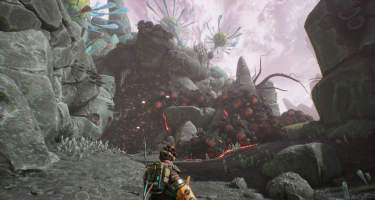 Indeed, they will quickly realize that this world seems covered with a kind of toxic parasite which gives its name to the game, theGunk“. Suspicious but curious, Rani wants to know more and understand what is wrong with this ecosystem. Not to mention the presence of vestiges of a forgotten extraterrestrial civilization for a long time and whose fate seems to be closely or remotely linked to the toxin…

My little Poupette, my little Hercules

Yes Rani is the adventurer, becks prefers to stay close to the ship and communicate by radio. Fortunately, the latter’s skills in mechanics allow Rani to use a robotic arm which is called “Poupette”, a kind of Swiss army knife serving as both a tool and a makeshift weapon. So as you progress, the heroine will have to clean the different areas of the “gunk”, collect resources and other craft materials, discover a little more about the fauna and flora, solve puzzles or even fight against enemies emanating from slime. No revolution here, but we focus on doing the job properly and the gameplay is very easy to learn. 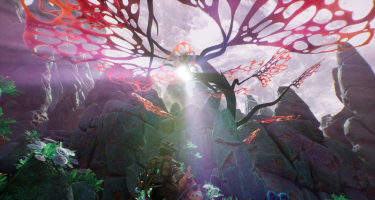 Materials scavenged here and there will give you access to a workbench granting you various improvements for your glove, mainly designed to make it easier for you to fight. Each “Poupette” upgrade makes sense and makes game progress more fun. New evolutions will also be unlocked by scanning objects in the environment, and will allow you to learn a little more about the strange world in which Rani and Becks found themselves. Moreover, the relationship between the two protagonists is the true focal point of the game. Communication will be permanent throughout the adventure and will allow you to get to know each of them better. However, the story suffers from a very short lifespan, four to six hours maximum., depending on whether or not you want to complete the game in its entirety. Thus, despite a narrative that seemed promising and based on good foundations, The Gunk leaves a bitter taste of a real lack of depth. And it’s not the fights, which are far too simple, or its lack of replayability that will prove the contrary.

I’m with Venkman. He got stuck. 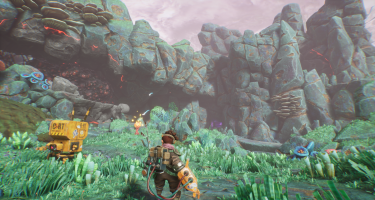 In general, the title ofImage & Form is a polished experience with few bugs or technical issues. However, there will still be one, which you will have to put up with. You will regularly be required to throw organic seeds into pits to grow large plants that will serve as platforms to reach new areas. Sadly, you will quickly understand that you will have to wait a second or two before jumping on the leaves of the latter on pain of going through because, for some obscure reason, the software takes time to assimilate this new interaction. A bit of a shame to have let this pass during the test phases before the final launch of the game…

Visually, the environments are generally successful and pleasant for the retina. On the other hand, the animation of the characters sometimes sins for lack of expression. The contrast is all the more flagrant as the dubbing of Rani and becks is, meanwhile, successful (respectively fiona nova and Abigail Turner). 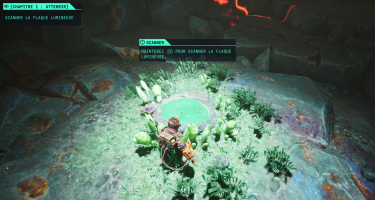 We pass quickly on the restrictive linearity of the game which often forces you to move forward with a single approach, without leaving too much room for the unexpected. For example, the only ledges that Rani can cling to are those who are painted yellow marks. Otherwise, don’t try your luck, it won’t work.

While The Gunk has its flaws, it’s still a nice little adventure game if you don’t have anything else on hand. The good news is that owners of the Xbox Game Pass can play it since it is included in their subscription. The Gunk is available now at computer, XboxOne and Xbox Series X.