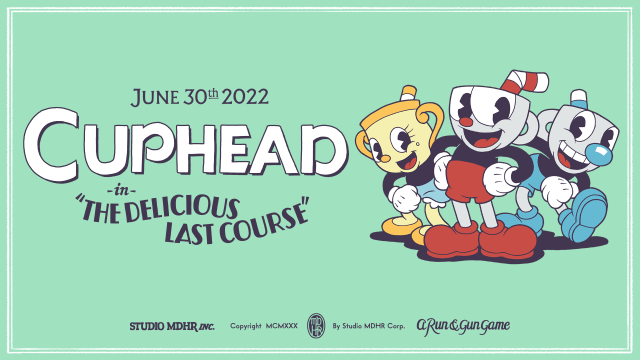 Cuphead announced his return at the Game Awards 2021. After having suffered a few postponements, the DLC is dated.

After having disembarked on a remote land answering to the name of “DLC Island”, Cuphead and his mate Mugman will undertake to visit it. Nevertheless, the place is teeming with people. It is because, within it, a certain group resides there: the future opponents of our heroes, formidable bosses of disproportionate size.

A new journey therefore which will be made available via the downloadable content “The Delicious Last Course” June 30, 2022 on PS4, Xbox One, Switch and PC (Steam and GOG).

A new serving of classic Cuphead action awaits in Cuphead – The Delicious Last Course! The Cuphead and Mugman brothers are joined by the clever and adventurous Miss chalice for a thrilling adventure on a still unknown Inkwell Island! Using new weapons, magical charms, and Miss Chalice’s unique abilities, players will face off against a fearsome, larger-than-life group of bosses to aid the merry Chef Saltbaker in Cuphead’s latest challenging quest! For anyone thirsty for adventure, be ready to set sail for DLC Isle when The Delicious Last Course releases on Xbox One, Nintendo Switch, PlayStation 4, Steam, and GOG on June 30, 2022..