Specialist in the genre, Nippon Ichi Software offers us, with The Cruel King and The Great Hero, yet another RPG imagined by Sayaka Oda. With this game released on PS4 and Switch, the universe takes on an aura already present in the director’s previous creation (The Liar Princess And The Blind Prince), that of a children’s story. An adventure narrated from start to finish by a female voice, which sends us into a marvelous world inhabited by creatures. And although the ingredients seem to come together to seduce and transport us, as well as the youngest, we must recognize that there are certain points that can come to tarnish the experience, thus creating more boredom and frustration than anything else. .

A young girl who dreamed of becoming a heroine 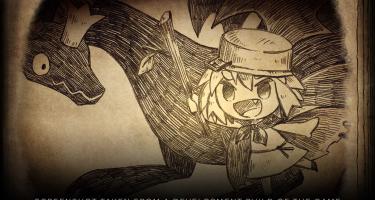 After playing a very beautiful opening screen, which owes much of its charm to lively music – the undeniable appeal of which could block you for hours in front of it – you will be sent alongside the heroine, a young girl named Yuu. His dream is ambitious: to follow in the footsteps of his biological father by becoming the hero, the one who has the power necessary to overcome the cruel Demon King, eager to place all the little human people under his yoke. A father who remains in his memory only by his exploits and the legends they created.

Human, Yuu leads a life away from her fellow human beings, and this, almost since her birth. Humanity is completely unknown to him. His reality is different and his friends are monsters, nice monsters that goes without saying. Among all this small world, she occupies her days as a true princess. No wonder, his adoptive father is nothing more or less than the ruler of this population of creatures. In other words, he is the Dragon King. And, nothing is more important in the mind of the latter than to help the child to evolve and progress in his quest. Nevertheless, it is difficult for him to let her go without fear in front of full of dangers. Because yes, the inhabitants of the forest – and other places – are not all so benevolent. During these multiple encounters with a number of animals (insects, raccoons, etc.), she can then count on her temerity and her strength, as well as those of the comrades who will accompany her, to get rid of them.

An initiatory story, where the marvelous takes shape, generally serving as entertainment – ​​as we will see later and as Oda herself admits during an interview – to a very particular audience, to an audience that will not have much hard to identify with the ambitious and dreamy little girl. The good, the bad, the emancipation of the paternal figure, the discovery of a reality that is not always beautiful… these are all themes covered. If it could very well create a certain moment between parents and children, like a storybook, we cannot hide the little joy we took in following Yuu’s adventures. In fact, they could have been pleasant and plunged us, at least momentarily, into a state of carelessness. However, several elements in the gameplay – we will see later – lessen our interest.

A world full of magic 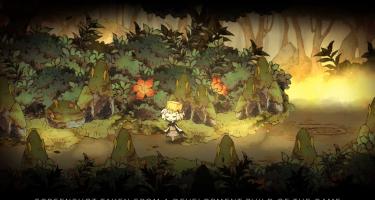 The Cruel King and The Great Hero then has all the tale. Plus, it bills itself as an illustrated children’s book. But, it is not very difficult to see it, we feel it without difficulty. Moreover, there is no doubt to have: this game has been thought of in this way. Aesthetics itself refers to this idea.

As we advance, as we engage in battles, everything refers to the world of books and the narration. The pages turn and the story told by a narrator (Reina Kondo) takes shape on the screen through a text accompanied by an illustration. Each line appears gradually, according to a well-defined rhythm, just to stick as well as possible with the Japanese voice which emits its words according to a very particular modulation. It is through it that the universe comes to life, it is through it that the characters come to life. And on this point, it is very successful. We let ourselves be bewitched without difficulty… or almost. Yes, to be able to follow, it would be necessary to at least master the language of Shakespeare. There is no option to change to French. A very unfortunate absence, especially considering the audience targeted by the game. 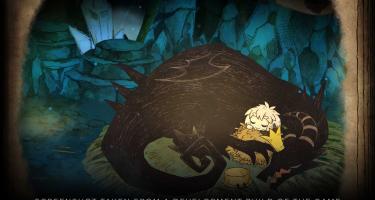 Those who will not be blocked by the language barrier will be able to have the pleasure of surveying a world populated by decorations full of magnificence. It’s beautiful, detailed and colorful, maybe a little too much. But hey, it’s not too aggressive to the eye. Moreover, this bias which consists, in a way, of infusing a well-felt playful aspect contrasts with its predecessor: The Liar Princess And The Blind Prince. Like the latter, the landscapes of The King and The Great Hero benefited from the same process, the same technique, having been drawn by hand. However, here, the tone is more magical, airy, dreamlike, etc.. In a word, everything overflows with optimism even in somewhat sad moments.

A good artistic achievement, even very good, which however only represents half of what really constitutes the artistic identity of the title, which can only come close to completeness with the soundtrack. The music is indeed for a lot. Mainly imbued with a joyful tone, the soundtrack fits perfectly into the wonderful, somewhat naive universe, and best accompanies the deeply optimistic character of our young heroine. As for the animation, there is little to say, to reproach.

No, on a technical level, the title may seem irreproachable. Maybe a few repetitions of musical themes that can get annoying after a while, but nothing too serious. The real concern is elsewhere.

Journey to the End of Boredom

The experience offered by this RPG is very classic and a little simple, so that we will have practically no difficulty in moving on the long path of our journey.. A level of difficulty completely consistent with what was said above. One of the main goals of The Cruel King and The Great Hero is discovery. It aims to offer a young audience a first approach to this type of entertainment..

Simple certainly, but in terms of attractiveness, difficult to have an amply positive opinion on the thing. If, at the beginning, we feel sympathy for the adventure to come, we quickly end up scalded. It’s flat and frustrating. Move forward, fight, then move forward, then fight again. This is what the game boils down to – although exaggerated – but the problem is not there, because if that had been the case how many games would have been disqualified in the eyes of yours truly. No, it is rather in the layout, the structure itself. 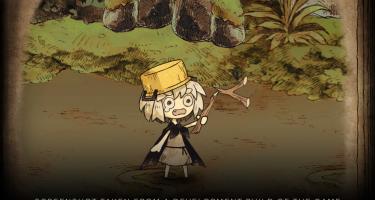 Basically, basically, all you have to do is walk a long way in order to reach your objectives, marked on the map by an exclamation point. To reach him, you will have to cross a succession of very empty corridors punctuated by several fights. Finally everything depends on the frequency, it is very variable. Indeed, the number of enemies is conditioned by the speed at which Yuu moves: if the child crosses the area running, there will be very few opponents. And if it works, the result will be the opposite, which is very unfortunate. First, we have no control over the speed of our movements. The girl can only run if her level of strength is higher than the others, which is almost the norm. So, we find ourselves moving forward slowly, moreover hampered by fights that appear unexpectedly. After a while, the nerves are really tested and discouragement sets in. Thus, we quickly lose the desire to take the various forks that we find on the way in order to see if there are chests somewhere containing objects that we could exploit later, such as , for example, fruits that give back some life points. A very useful element during the fights. 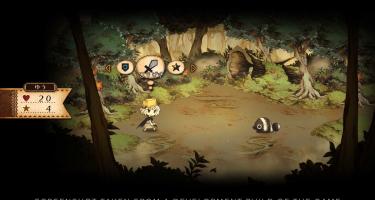 By the way, let’s talk about the fights. They take place on a turn-by-turn basis and, you will have understood, there will be a shovelful of them and rarely for your great pleasure. Their appearance will jerk your progress. However, you will be allowed, according to your wish, to flee these forced confrontations. At least, you will be given the possibility to choose this option, which, in the majority of cases, will not necessarily be accomplished. And then, as you will surely understand to your cost, these fights against third parties you will need it, you will depend on it. They will award you experience, you will level up, gaining extra health, attack and defense points. At the same time, you will also unlock new skills. These will be necessary to inflict more damage on enemies who will be more and more powerful, including bosses. But, to be able to use these faculties, you will need to have certain points that you will acquire after each turn, otherwise you will only have to rely on a single hit. Which will obviously be a little less effective.

The equipment that you will collect over the course of the adventure will greatly help you to boost your statistics. Nevertheless, they are few in number and their advantages are very relative. As far as weapons go, there isn’t much to get your teeth into. In fact, only Yuu will have a few swords to contend with. The others, they will be satisfied with only one. A point that is annoying to say the least. Fewer weapons mean less opportunity to increase one’s strength, which will inevitably lead to more difficulties, especially since it often happens that the clashes are completely unbalanced. You, being able to present only two fighters, should sometimes face 4 creatures at the same time often inflicting very critical attacks. 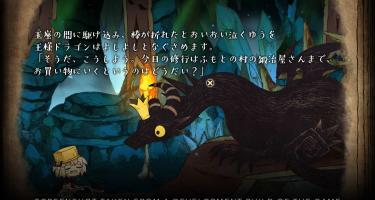 To resist the enemy offensive as well as possible, healing items will be made available to you as well as others, one of which gives you the possibility of reviving your teammate or others which allow you to cancel certain harmful effects (poison , burn…). It is recommended to have enough. Either you will find them by venturing around the map, or you will collect them as a reward after a confrontation – but not always – or you will buy them from the merchant with the currency you have acquired by defeating your enemies. For bosses, this type of resource will be more important. The fights that engage them are sometimes very long, and the damage is great. Therefore, you will happen to lose. This will notably have the effect of discouraging the uninitiated public for whom the game seems intended.

To sum up, the pleasure is not really in order with this title. The appearance is attractive, but concretely, the game is paved with elements opening its doors to boredom and deterring any desire to take detours. The adventure is exhausting enough to want to do the various secondary missions that swarm here and there.