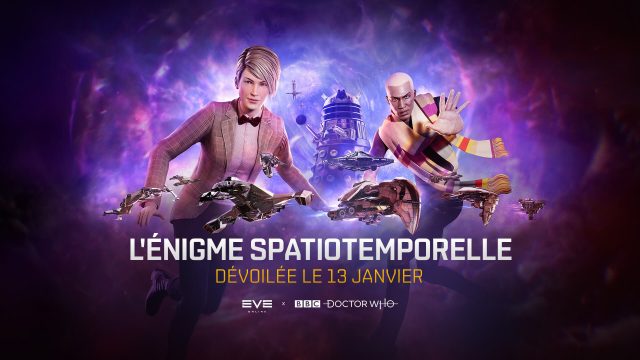 The BBC has signed an agreement with EVE Online to teleport Doctor Who’s lore into the free-to-play galactic MMORPG at a once-in-a-lifetime event.

We do not yet know which incarnation it will take for this crossover, but the Free-to-Play Galactic MMO from CCP Games Partners with BBC to Bring Doctor Who Hero to EVE Online. Since the January 13, players will be able to face the Daleks in massive battles, until February 1, 2022.

If we believe the illustrative image of the video, it is the latest doctor who should be in the game, played on the screen by Jodie Whittaker. But it will probably not be the only one, since we can also see the famous 4th doctor scarf on the miniature. In any case, the “Interstellar Convergence” event will integrate a new scenario, several challenges and thematic objects.

EVE Online x Doctor Who invites players to search for artifacts from the Great Time War in a Gallifrey-themed play area. These objects are all clues to track down the infamous Daleks with a view to facing them in an incredible intergalactic battle. Survivors will glean unique rewards to bring back to New Eden. Throughout the event, a login campaign will also offer skill points and Doctor Who stamped items to all EVE Online players.

All the information can be found here.