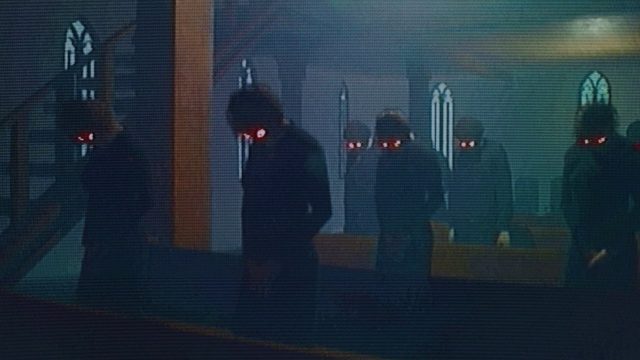 If you like inspired horror games that flirt with retro, The Fridge is Red might be of interest to you.

The Fridge is Red, literally The Fridge is Red, is a game name that can easily be described as atypical. However, contrary to what you may think, the goal is not only to hide from a bloodthirsty fridge (FNAF has to be careful). The truth is, this production with the style old school by 5WORD Team and tinyBuild goes much further than that.

No more snacks at 1am

The Fridge is Red tells the story of Frank, a man who does not find his life exciting, far from it. However, it will take an unexpected turn the day when one of our hero’s customers drops off a red fridge in deplorable state. Unable to repair it, he has no choice but to leave it in the cellar. The object then emits an evil aura that will end up leading Frank into nightmarish places of everyday life. His only way out is to flee.

READ :   Mothergunship: Forge, a VR sequel for the wave shooter

Did the pitch pique your curiosity? Good, because we have two good news for you. First of all, you should know that the game already offers a free demo on Steamperfect to get an idea of the title before its release. And indeed, the latter will arrive soon. The appointment is set for September 27but only on PC via Steam. It is also important to note that the French language is supported by the soft.

A last clarification regarding the complete version is required. It will be cut into six episodes. The developers describe The Fridge is Red as an anthology with an aesthetic strongly reminiscent of the PlayStation 1 era. You be the judge.

Will you have the courage to get into the fridge?