The Naughty Dog studio is talking about him and his The Last of Us projects again because of a recent update to the profile of one of his testers.

Expected at the turn by many, the possible (probable?) remake of The Last of Us is on everyone’s lips as soon as we talk about the projects in progress at Naughty Dog, in the same way as the multiplayer game announced for a while. A few days ago, it was a developer from Visual Arts Service Group who was increasing the pressure and today, it is a QA tester from Naughty Dog who is putting the fire back on the fire.

Soon multiplayer and a remake for The Last of Us?

It’s a certain Corey Hong who just gave a new ray of hope about The Last of Us Remake and the multiplayer game supposed to be from the same license. Two important projects about which we know absolutely nothing, but which are the source of all the fantasies on the web.

QA tester at Naughty Dog, Corey Hong added a layer of mystery by updating his LinkedIn profile where he says he is working on “an unannounced remake” and “a multiplayer game.” The man is not on his first try since since 2019 he has notably worked on The Last of Us 2 and Uncharted Legacy of Thieves Collection. 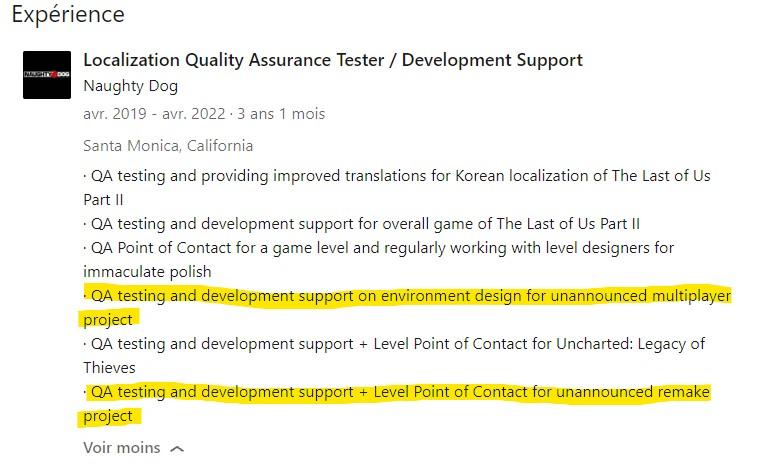 If we don’t have any tangible information as to the nature of these two games, the rumors that are intermingling at the moment lead us to believe thatThese would be The Last of Us titles. We know, for example, thata multiplayer title is in advanced development within the Dogs for some time anda remake project had been started by Visual Arts Service Group before being picked up by Naughty Dog. The latter would also be finished soon if we are to believe the sources of VGC.

READ :   Ikonei Island: An Earthlock Adventure is coming to consoles and PC