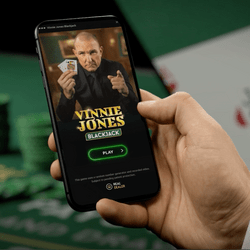 Founded during 2019, Real Dealer Studios is establishing itself as a game publisher using a somewhat unusual random number generator.

Indeed, its various titles are all animated by live dealers so as to offer us an extremely addictive atmosphere.

However, they are not filmed live. The latest game from this talented software has just been released and it involves a blackjack table.

When you start a game session on Vinnie Jones Blackjack, you have to admit that you don’t really have the impression of facing a game under RNG. In fact, from the very first moments, we benefit from the charismatic presence of Vinnie Jones to animate our games.

This is what makes the originality of the editor Real Dealer Studios. Its ambition is to offer players a Hollywood-style cinematic experience. To do this, it employs professionals in the sector such as directors, editors or actors among others.

READ :   When the People meet at a charity blackjack tournament

The actors are filmed in different situations, much like in a movie, and the game chooses the appropriate video clip according to the cards dealt on the game board. Consequently, it is indeed a title using a random number generator.

Nevertheless, since it is animated by a real dealer, we enjoy an atmosphere reminiscent of a live table.

In terms of gameplay, Vinnie Jones Blackjack follows the great tradition of this casino classic to the letter. It simply adds the Six Card Charlie rule, which allows you to automatically win the game if you get a hand of 6 cards that does not exceed 21, as well as the 21+3 side bet.

The main originality of the title is that it is the first blackjack game hosted by a real-life celebrity. And since it’s Vinnie Jones, we can expect a few cheeky remarks from time to time to add a little more spice to our games. Indeed, he established himself in the 80s and 90s as the bad boy of British soccer.

READ :   BetMGM's strategy to expand its position in the United States

Then, he turned to the cinema where he played the big guns in some Hollywood movies like 60 Seconds or Operation Swordfish among others.

It was during the month of February 2022 that Real Dealer Studios software announced the signing of a partnership agreement with Vinnie Jones for the release of several games. The first one was launched last September. It is Vinnie Jones Roulette, which allows you to play the queen of casinos.

We also know that other games are planned. Called Vinnie Jones Stories Roulette, the next one will be released in a few days only. For the others not yet announced, we will have to wait until next year.