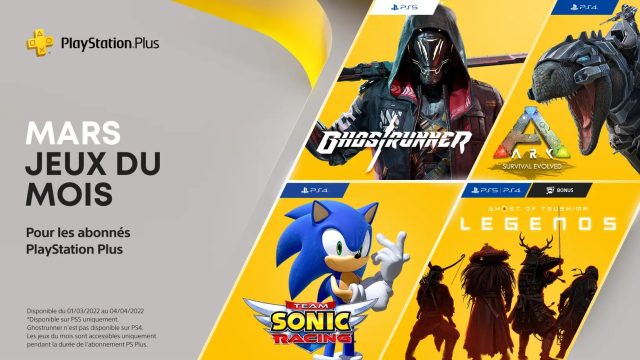 Everything had been previously announced by the leakers, and Sony confirmed the list for March 2022: naked hunters, Japanese hunters, megacorp hunters… and Sonic. 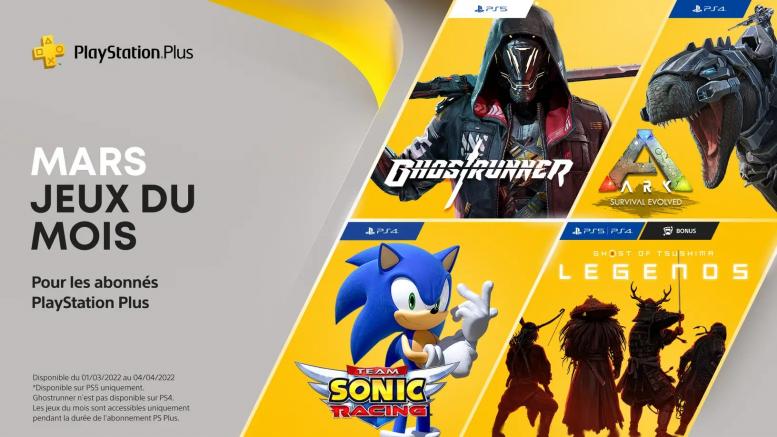 The announcement finally came just a few hours after the revelation from Dealabs (like every month now): the March PS Plus games are now known.

So no surprises, the 4 previously announced games end up in the listnamely ARK: Survival Evolved, Ghost of Tsushima Legends, GhostRunner and Team Sonic Racing, which will integrate the PlayStation subscription program from March 1 until April 4.

Stranded naked, cold and starving on a mysterious island, you must hunt, harvest, craft equipment, grow crops and build shelter to survive. Use your skills and cunning to kill, tame, breed and ride the dinosaurs and other prehistoric creatures that inhabit ARK.

Ghost of Tsushima: Legends is a new cooperative multiplayer* experience inspired by Japanese mythology and folk tales. Choose one of four classes (samurai, hunter, ronin, or assassin) and play with your friends or via online matchmaking in a series of two-player story missions, or in four-player survival missions.

Ghostrunner is a hardcore FPP slasher packed with lightning-fast action, set in a sinister, cyberpunk megastructure. Climb the Dharma Tower, humanity’s last refuge after a global cataclysm. Go from below to go up, face the tyrannical Keymaster and take your revenge.

Team Sonic Racing combines the best elements of arcade games with a fast-paced, competitive racing style. Compete against your friends in fast-paced multiplayer races, race through amazing worlds, and team up with your teammates by sharing boosts and speed-up bonuses.

READ :   Arceus and Darkrai land, how to capture them? News @VGR

To find out more, head over to the PlayStation Blog.