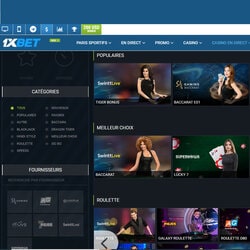 Paris Saint-Germain (better known by its acronym PSG) is simply one of the most prestigious soccer clubs in France. As a result, it attracts many sponsors.

Recently a new one has been made official. It is 1xBet, an online gambling operator of Russian origin that is mainly present in Africa and Asia at the moment.

The only problem is that it has an extremely sulphurous reputation. For example, it has caused scandal in England, Russia and Curacao in recent years.

Taking advantage of the excellent image of exceptional players

By becoming one of the sponsors of PSG, the operator 1xBet will be able to count on the excellent image of mythical players such as Lionel Messi or Kylian Mbappé in order to develop its activities. However, he has never invested in France. Moreover, it does not have a gaming license in this country, nor in Spain, Italy, Switzerland, Belgium or the Netherlands for example.

Nevertheless, he has already tried his luck elsewhere in Europe and in the world, even if it did not always go well.

In addition, it also promoted other unlicensed platforms in the country and even offered bets on games featuring minors. As a result, the UK Gambling Commission ended up banning this operator altogether. The sponsorship contracts with the two British clubs were terminated in the process.

Under these conditions, one can be surprised that such a dubious operator who was expelled from the UK and who is not even licensed in France has just signed a partnership agreement with PSG. Moreover, this famous contract has already caused a scandal in England.

It is not only in Great Britain that the operator 1xBet has very bad press. Indeed, during the year 2020, its managers have been targeted by the Russian justice for fraud, embezzlement and illegal practices. In this case, they face a prison sentence and a fine of up to 1.5 billion rubles, which is no less than 23.83 million euros.

The operator 1xBet has also been noticed via its subsidiary based in Curaçao in the Caribbean. It refused to pay back its members when it was forced to file for bankruptcy. This concerns millions of dollars. Moreover, a gamblers’ association even accuses Curacao of being 1xBet’s accomplice in helping it launder money.