After the saga’s strong comeback in 2019 with Borderlands 3, Gearbox offers us Tiny Tina’s Wonderlands, a crazy spin-off centered on Tiny Tina, a completely crazy young girl addicted to explosives that we have already come across many times in the license. Let’s see what the soft has in the belly.

A title? To do what? 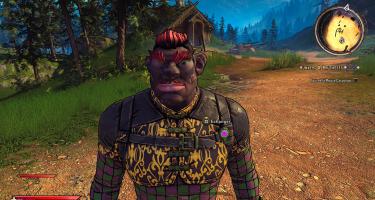 Tiny Tina’s Wonderlands is a sort of true/false sequel to Tiny Tina and the Dragon Fortress released in 2013 as Borderlands 2 DLC before being released as a standalone late last year. We find ourselves in the skin of a character, which we will create here from scratch, invited to participate in a game of Dungeons & Brutasses, a role-playing game directed by Tiny Tina.

This time, however, unlike the other opuses in the saga, we don’t just choose a class, but we actually build a character from A to Z. Face, hair, skin color, measurements… we have the right to a rather complete creator who allows you to make characters as stylish as they are disgusting. Everyone will find noon on their doorstep even if the cel shading, still current, tends to force the features sometimes making our characters a bit too hard. 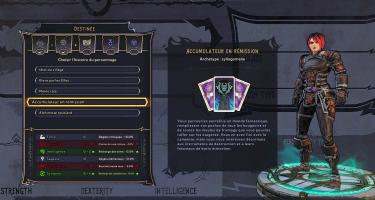 Once our brute created, we choose a class among the 6 available to us: Sporodder, Brr-Zerker, Stormstrike, Sow Death, Defouromage and Trucidopath. Obviously, each has its specificities and skills and a unique talent tree. All also have a unique passive power and two active powers, although only one can be equipped by our character (but exchangeable on the fly). For this test, I personally chose Sème-La-Mort and Défouromage in second class (unlockable only at the end of the game, as revealed by Gearbox). Two classes focused on magic and elemental damage that match quite well together, even if in the end, all mixtures are possible, especially sincethere is equipment for all combinations.

For having played with all the classes, in the end, they are all worth more or less, except those whose powers maximize melee attacks since this mechanic is underused and not really exciting to use. We have the right to close combat weapons, but there is no notion of combo or special attack. In the end, these are just vulgar butt shots not really pleasant to place, whether you play the keyboard / mouse combo or the joystick. Too bad, since there was plenty to dig there. Same observation with “magic” which here replaces the traditional grenades. On paper, it’s great, but in reality, it does not change much and it even lacks madness compared to the grenades of Borderlands 2 and 3. 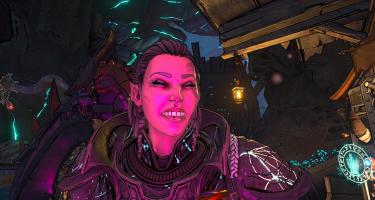 Overall, it’s even on this that Tiny Tina’s Wonderlands disappoints. The game offers an adventure and an atypical idea: virtualize a paper role-playing game. We are indeed in a universe of heroic fantasy, Tiny Tina pulls all the strings and dictates the plot, twists and mistreats it on the fly which sometimes gives very funny sequences, but that’s all. For the rest, we find pistols (shotgun, submachine gun, pistol, etc.) directly from Borderlands 3 on which the devs stuck a medieval skin and basta. To be honest, the arsenal is even a hair below what Borderlands 3 offered while the feel and gunplay haven’t changed one iota. The weapons are always decked out with a bunch of statistics that can either make them completely smoked, or completely unplayable, and in gunfights we just jump in all directions, beating down an army of brainless HP bags. On PS5 fortunately, the Dualsense does a discreet job, but more than enough, to send us feedback when we fire. A nicer one.

We are indeed in a Borderlands, there is no doubtbut for once, taking advantage of the universe that the subject brings to give a fresh shot in the recipe would not have been too much.

Way too close to Borderlands 3

Don’t give me orders, I decide! 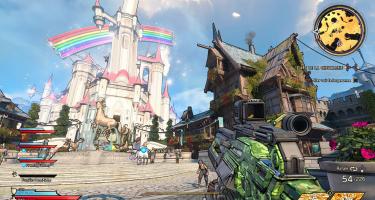 But don’t get me wrong, Tiny Tina’s is still a very enjoyable game to play. It backfires and explodes in all directions, it’s funny, and the humor is less clumsy than in Borderlands 3. Visually, if the textures are clearly not folichonnes, the cel shading always has its little effect and gives a “comics” note that always hits the mark. On the other hand, the art direction is frankly uneven. While she is capable of doing very good, even excellent, with very colorful and atypical worlds, she also takes us out of ultra-classic levels (villages, castles, catacombs, etc.) or even downright devoid of charm and there again , it’s really unfortunate. Same story for everything related to character animations, enemies and facial animations. There, very clearly, the game engine is starting to feel warm and Gearbox has an interest in quickly finding a parade for its next episode since Tiny Tina’s Wonderlands is at the limit of the tolerable on this side. The characters have no expression and when they do, they are so abused that it is perfectly ridiculous and everyone seems to be moving with a broomstick firmly stuck in… a secret place.

The art direction is frankly uneven

Fortunately the software is funny and throws a whole bunch of easter eggs, more or less hidden. In the process, you end up taking everything you see lightly and the flaws are somewhat mitigated. It is frankly nice, especially between friends, to gun down villains with all your might. 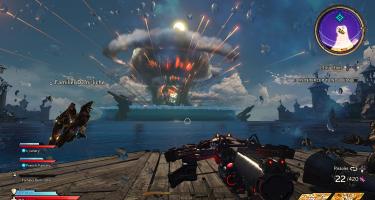 Besides, the villains, let’s talk about it. If Tina is the only one to decide on the scenario, there is still one. Our mission is to save the queen of the enchanted kingdom, the beautiful unicorn all dressed in diamonds, the most beautiful, the classiest, the most majestic ass-stallion. The latter is brought to the ground by the terrible Dragon Lord who acts as the ultimate villain and we must then trudge to the four corners of the game board (and its wacky worlds) to save her.

Tiny Tina’s Wonderlands breaks away from the traditional open world structure. We retype (reluctantly) more or less large instanced areas as in the previous opuses with the difference that, this time, they are all part ofa giant game board in which we move our miniaturized avatar, like a Pop figurine. On this board, there will be quest giver NPCs, items to pick up, etc. and also a very bad idea from the developers: random encounters. To put it simply, it’s like in Pokémon. As soon as we walk in tall grass – no fake, huh – we can provoke the appearance of an enemy who comes to hit us in the bacon and then provokes a fight. We then find ourselves teleported into an arena where we must slaughter our attackers until the loot appears and close the deal. It’s fun the first two times, but it quickly becomes boring and we will then quickly give them donuts as soon as they appear to dodge the confrontation.

Anyway, you won’t need to go through it to gain levels, or to loot, since the game is full of side quests, dungeons and chests, which is more than enough.

Get out of my room! 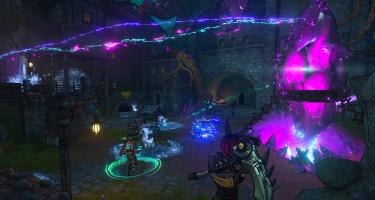 XP is flowing and gear is dropping in bundles of 1000. You will also be able to improve the size of your inventory, which will save you many hours of sorting in front of the game’s distributors (acting as merchants). It is still necessary that your teammates do not start to try each weapon, spell and shield as soon as they pass in front of a stand (yes, it is experienced). Especially since the software is extremely generous in rewards. 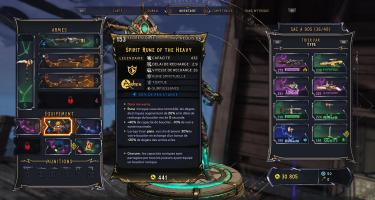 Tiny Tina is indeed surfing on the aspect “extreme loot and weapons by the billions” specific to the Borderlands series. The game even makes it the carrot of its endgame experience, the Chamber of Chaos.. A giga secret room unlockable only once the game is over in which you can chain random dungeons to win more and more, increase the level of difficulty (up to 20) and face ever more powerful bosses. On paper, it’s ultra crisp as a proposition, especially sinceonce you reach level 40, you can still continue leveling up your character by spending points in different stats like Brutasse tokens in previous games. But again, in fact, it’s less fun than expected. 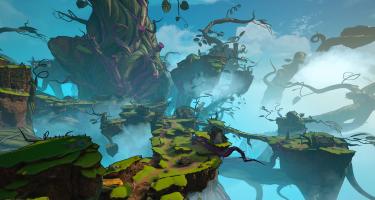 Already, because the famous dungeons are actually only arenas that must be cleared of any threat to move on to the next one, and above all because the Chamber of Chaos recycles the same enemies, the same bosses and the same decorations as in the campaign. Result, even if the loot is legion and you always unlock more by climbing in the difficulty levels, well, we end up going in circles. This is all the more true since there is neither objective nor challenge to put in your mouth to boost the recipe. We will clearly have to wait for new content before being able to chain long game sessions in the Chamber of Chaos and that’s good the first DLCs are already starting to arrive (irony).

I will not dwell on the bugs encountered during this period insofar as some have already been corrected since the release. But there are still a few rather annoying ones like sudden disappearances of images in the inventory, a quest log that no longer lists anything or visual indicators that go missing. Not to mention the completely saturated in-game chat and temperamental crossplay servers. In short, it is not yet Peru.