After a shattering appearance at the Game Awards in which a glimpse into the history and characters of Tiny Tina’s Wonderlands was given, 2K and Gearbox Software continue their momentum by revealing new information on the Borderland spin-off.

The bulk of this ad: two new classes which will join the Trucidopaths and the Brr-Zerkers, respectively an assassin and a tank, unveiled a few weeks ago.

Today, the light is shed on the classes Defouromage and Frappaclysmic through a trailer that is still just as crazy. The Defouromages, as their name suggests, are mages wielding guns, the latter indeed allow them to channel their magical energy. They will even be able to turn enemies into carefree cattle. The Frappaclysmics as for them are robust warriors wielding a spectral hammer capable of producing devastating flames. They are accompanied by a familiar, a fire-breathing wyvern and their dragon aura will grant bonuses to the entire party. 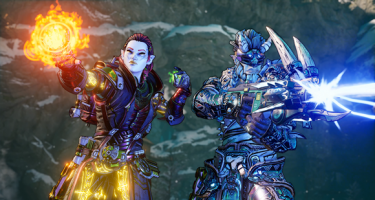 And since good news never comes alone, 2K and Gearbox took the opportunity to tell us in more detail about the environment in which the characters of Tiny Tina’s Wonderlands will evolve, by presenting 3 new places: the Freshness of Sobs filled with toxic fumes from deadly fungi, fear swarming with skeletons and living dead and finally, Mont Jabot populated with horrible restless little Goblins. These three areas will be full of disgusting monsters that you will have to happily exterminate.

READ :   Chicory: A Colorful Tale is out now on Switch

Of course, the booty will also be there, especially since the multiplayer mode will allow you to share the rewards. In the program, millions of different weapons to collect, all with their unique properties, but also shields, rings, amulets and much more.

Tiny Tina’s Wonderlands is slated for release on March 25, 2022 on Xbox Series, Xbox One, PlayStation 5, PlayStation 4, and PC through the Epic Games Store. For more information about new products planned by 2K and Gearbox, go to the Game Guide and the Developer’s Notebook.