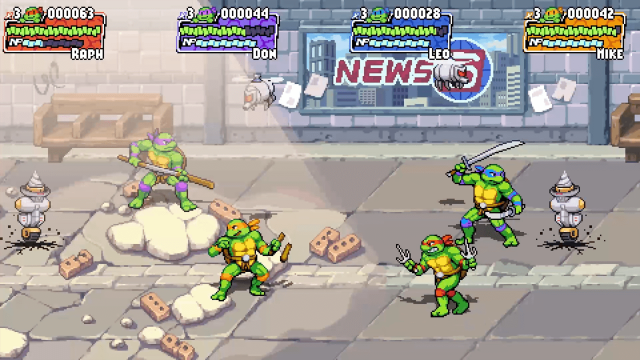 In a video presentation of the artistic direction of the new Teenage Mutant Ninja Turtles: Shredder’s Revenge game, the team explains its nostalgic inspirations.

A news BTS video (or Behind The Scenes for neophytes, or “behind the scenes” for French speakers) was published by Dotemu on the production of Teenage Mutant Ninja Turtles: Shredder’s Revenge. The new opus of the adventures of Ninja Turtlesin partnership with Nickelodeon, will take heavy inspiration from the franchise’s early beat ’em alls and hopes to bring that nostalgic feel back to PC, Switch, PS4, and Xbox One next summer.

On this occasion, the Tribute Games team hasanalyzed the best games of the genre from the 80s and 90s and tried to capture the essence of these titles and the spirit of TMNT games to offer a faithful and modern version of this experience. In particular by working on specific animations and movements that should further mark the personality of each turtle. Jean-Francois Majorthe studio’s co-founder, explains:

We designed Teenage Mutant Ninja Turtles: Shredder’s Revenge as a season of the legendary 1987 cartoon, treating each level as a separate episode. We’ve combined elements from the TMNT extended universe with the inventiveness of combat that Turtles fans love. The result offers a breathless rhythm worthy of an action movie. Transcended by the charismatic personality of the universe and the Virtuosity of the confrontations, this new episode is a real pleasure to play.

Discover the behind the scenes of the game’s art direction in this new video:

READ :   Resident Evil 4: a dive into the past with a fan's demake