New boss of Crystal Dynamics, Embracer Group takes stock of its licenses and reveals the figures around the Tomb Raider series.

This is the hot news for this Monday, May 2, 2022, Square Enix has sold several of its Western studios to the Embracer group, which already owns THQ and Gearbox. The new leaders therefore took the opportunity to take stock of the biggest licenses they have just recovered, including Tomb Raider.

That’s a lot of Lara

In all and for all, since its creation, the Tomb Raider license has sold 88 million copies for a total of 16 games (12 main and 4 spin-offs), including 38 million come from the last trilogy started in 2013 by Crystal Dynamics. On average, the saga obtains an 81% note on Metacriticwhile mobile apps have an average rating of 4.6 on the app store. Very nice scores for a brand that has been selling for years and a heroine who has survived the ages, despite a few failures. 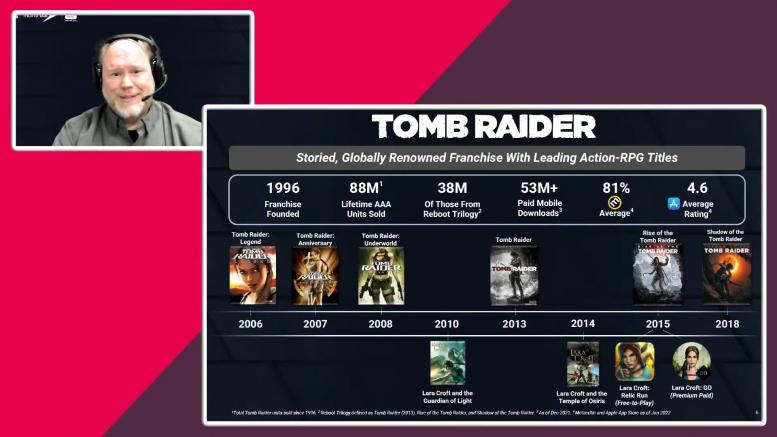 25 years later, she is still in good shape.

Launched in 1996 on PlayStation, Tomb Raider quickly caused an earthquake in the industry, in particular thanks to its heroine, the beautiful Lara Croft.

READ :   Our review of the Recaro Rae Essential gaming chair

Elevated to the rank of an icon, Lara will be in PlayStation’s heyday for quite a while. Although ultra-sexualized for years, Lara is one of the first strong women to be honored in video games and will become a star in her own right. She will even offer herself the cover of magazines having no connection with the video game sector and the right to have her own official doubles, which will also earn her a place in the Book of Records.

From 96 to 2003, it’s Core Design that takes care of laying no less than 6 games. After four successful first episodes, the studio slowly begins to spread out with Tomb Raider Chroniclesto completely fail in 2003 with Tomb Raider: Angel of Darknessyet supposed to be a revival for the saga. In July 2003, Eidos then handed over to Crystal Dynamics which begins timidly with Tomb Raider Legend in 2006, a “go-fast” episode, and turns Lara into a real bimbo for the occasion. This episode also begins a new trilogy which will also include a remake of the original Tomb Raider: Tomb Raider Anniversary (2007).

In 2013, Crystal Dynamics made the biggest change in the history of the license and decided to start on completely new bases with its reboot. soberly called tomb Raider. A few years later will follow Rise of the Tomb Raider (2015), sold for a whole year as an Xbox One exclusive, then Shadow of the Tomb Raider will close the march in 2018. In parallel, the series will welcome two cooperative shooters in isometric view on consoles and PC, as well as two mobile games.

Nevertheless, Crystal Dynamics does not intend to stop there and has recently announced the start of the next episode, which, for once, will launch a new saga. For the moment, we know absolutely nothing about the title except thatit will be developed under Unreal Engine 5 and that the developers had confessed want to intertwine all the chronologies of the saga.

Lara is therefore not ready to bow out and will keep us company for quite a while.