Ah the human species, the ugly race that mutilates its habitat by destroying itself in the process. Wars, overconsumption, ecological deviations … A sad record, after millions of years of evolution, which serves here as a background for Too Many Humans, a kind of STR determined to lecture us by asking us to reboot humanity… through violence. Logic. 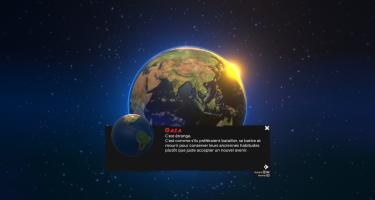 Planet Earth, Gaia, is actually alive. At the very least, she is endowed with a soul and seems to be gifted with speech. The pépette hurts, very badly, humans scarred their lands, destroyed their forests, polluted the oceans and waged constant war on each other by squandering all natural resources on the altar of overconsumption.. Gaïa is destitute and does not really know what to do. This is where his brother comes in, a demonic entity who has a sacred gift for necromancy and who decides to act to try to reason with humanity.

He therefore finds THE great solution to all his sister’s ills: the invasion of the living dead, the obvious, who would not have thought about it? Nothing like a good big pandemic of zombies to question yourself right? No?

In the “narrative” thread, nothing goes

So here is Too Many Humans’ proposal, to take control of a zombie apocalypse and kill ugly humans, far too many and too mindless.. Through a first chapter of 2-3 hours (others will be deployed later) we target the key points that hold humanity together to make it bend and force it to find new solutions to live. 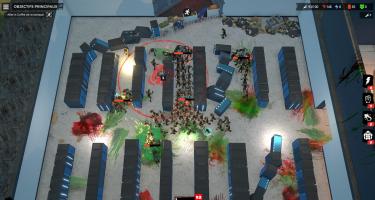 Thus, we will attack where it hurts. We will start by destroying the political force by attacking Washington DC (obviously it is the center of the world), to no longer allow humans to think. We will then annihilate their capacity to overconsume by sinking a multitude of trawlers and other transport vessels (it is well known that it does not pollute, is it not) and by destroying their finances agglutinated in Fort Knox, obviously. Then, we will take advantage of the intellectual weakness of humans, who are not able to think for themselves, by taking control of television to transmit beautiful green messages. Finally, we will prevent them from polluting by destroying coal mines, the main source of polluting energy, it is well known. And above all, because Gaia is fed up with fratricidal bloodbaths within the same species, they will be massacred in every way, whether they have weapons or not. Logic.

READ :   Playground on a new title in the Forza Horizon franchise

You will understand, in the “narrative” thread, nothing is right. Again it would be taken in the second degree from start to finish, why not, but even there it falls flat. Even if human debility is here magnified to its extreme, the eco-friendly speeches and other moralizing fables that Gaia, her brother, and the very construction of the game tell us, are absolutely nothing funny, although the app tries to bring the second degree. In addition to being boring to death and repeating the same things 50 times, the texts are full of translation errors: missing words, sentences that sound wrong, etc. No really, the pitch could have been conducted with humor (real humor, not just two or three valves) and a real perspective on the situation to lead to an honest and unforced reflection, but it is not.

And killing humanity, is it funny at least? 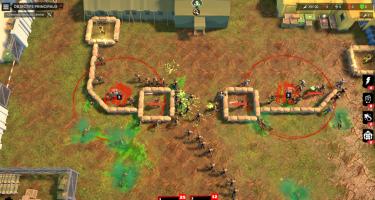 In this case, we are at least entitled to ask that it be funny to massacre our fellows by throwing hordes of zombies on the corner of the face. Well after “hordes” it may be a bit strong word since in the end, we will not be able to have more than 100 critters, and the game allows itself to drop in framerate when there is a crowd. Not for lack of having a good machine to do the test (Ryzen 7 3700, 32 GB of Ram and an RTX 2080S however). Especially when you run the game, it’s hard to see where the problem is coming from. Especially since technically it’s clearly not crazy. We are in top view, the modeling and the animations of our units are pretty damn crazy and artistically, we are in front of something quite mundane. Nothing sticks out, it’s sober and the game may sport pretty garish colors, nothing will prevent us from seeing that everything on the screen is sorely lacking in soul. It’s barely clean, nothing more, nothing less, but it’s very mobile game all the same.

The level design is only a pile of areas corridors on which are swung civilians, to nibble to swell our ranks, and all dressed the same for that matter, as well as armed enemies to strip down. The latter will also try to defend themselves with several units: police, soldiers, defense turrets and other badguys armed with flame throwers. But hey, we’ll see, the strategy will always be the same at the end of the day.

We therefore find ourselves in front of a very simple STR whose camera will move using the ZQSD keys on the keyboard, but without the possibility of rotating it. Our units will have to be controlled using howlers, a sort of beacon that they will follow like idiots. You can also have several of them to create different groups, on paper it is supposed to allow you to set up strategies, such as attacking from several sides at the same time or sending certain types of zombies first. line, but in fact it is perfectly unnecessary sincethere is absolutely no difficulty. 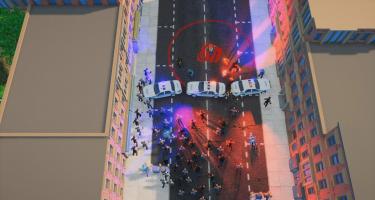 We have several types of zombies in our hands, all of which have a use in the field.. In addition to the basic undead, we can have fun turning them into electrics to overcome energy shields more quickly, explosives to blow everything up and make their way through concrete walls. But also more powerful monsters such as alphas which can tank and do great damage, or thick brutes capable of knocking down certain obstacles. Cool mutations on paper, sometimes mandatory to move forward when the path is blocked, but that’s it. For the rest, it will be enough to go there in numbers and to swing your hordes on your adversaries by letting them do the housework and if they die, it does not matter, you will be able to be born again via lairs acting as checkpoints.

So, it is very likely that a game over will be in the game, since mutating creatures and creating them from their nest requires resources (flesh, electricity, oil, etc.) which can be found on the ground and these are not unlimited. . But quite frankly, during the test, I never missed one, so I didn’t even care anymore.

Note Moreover, being dependent on resources such as oil and electricity to achieve your ends is quite funny considering the morality that you eat throughout the game, unless this is an attempt to make a criticism, a questioning, who knows? No idea, in any case it does not take.