Created in 2016, the Total War Warhammer series has acquired its acclaim over the years thanks to a faithful transcription of the Games Workshop universe and complete gameplay. The Total War saga, available in a multitude of episodes and spin-offs, is renowned for its mechanics that mix turn-based strategy and real-time combat. A trademark that has proven itself, which here is combined with a strong license which has notably raised Total War Warhammer 2 to the rank of essential, despite a questionable DLC policy. Suffice to say that this Total War Warhammer 3 is one of the most anticipated titles of this beginning of the year. Well Named? It could well be.

A war hammer with a still solid handle 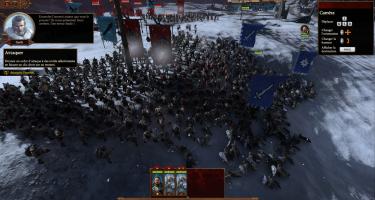 Total War Warhammer 3 is in line with previous opuses and certainly does not intend to reinvent the wheel. There are thus several factions that compete for a single objective on a single world map. In this opus, it is a quest for power that is at the center of all evil. All aim to take possession of the power of a dying deity locked in a hellish dimension. If the screenplay bases are most agreed, the strength of Total War Warhammer 3 (like previous software) lies in its ability to offer several facets to this same quest depending on the empire that we decide to embody afterwards, but before that, we strongly recommend that you do the prologue.

At the launch of the game, in addition to a cinematic telling us the beginnings of the plot, we will therefore have the opportunity to get our hands on the game mechanics through a long prologue, a kind of shortened campaign, also serving as a prequel to the scenarios main campaigns. In this short chapter, you will be in command of a mighty warrior who has gone in search of Ursun, a deity of the Far North, whose roar meant to scare away winter has not been heard for years. Well designed and fun to go through, this first act is a great tutorial session for neophytes and a good remedial course for regulars. In both cases, we would anyway tend to recommend it to you if only to know the causes of the disaster which will subsequently lead to total war. 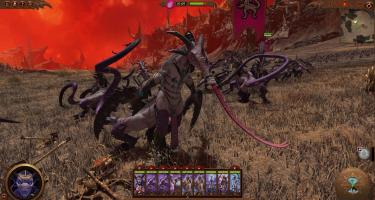 During a large handful of minutes, which can turn into several hours moreover, the prologue teaches you (or relearns) the basics of the gameplay of a Total War Warhammer such as turn-by-turn movements on a world map or even the diplomatic decision-making, always simplified here and based only on non-aggression pacts, alliances or open wars. We will also learn how to manage our cities and their buildings (garrisons, stables, markets, etc.) bringing many resources, both material and “human”, to strengthen our presence in the territories and our strike force. The tutorial will also allow us to get our hands on the basics of warthe management of our army at rest (recruitment and maintenance of units each turn with resources), but also and above all in combat.

Artistically still faithful to the Warhammer universe, a treat

As a reminder, if the strategic aspect (movements, decision-making, etc.) takes place on a turn-by-turn basis, the confrontations take place in real time. Each unit is then represented on the ground, to the point of sometimes bringing together thousands of entities simultaneously, and it will be your duty to manage their movements and their formations. As a bonus, you will have to play actively with your warlord to use his powers and his aura of command capable of passively boosting the morale of the troops around him, but also of your heroes, imposing titled characters with special abilities to be activated manually on the battlefield. The result is visually daunting and engaging combat, where strategy will take precedence over brute force. Playing with the environment and its reliefs will also be a viable option, not to say essential. to gain the upper hand over opposing troops and sometimes win fights that were announced as lost in advance. 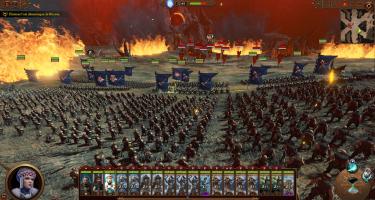 We take it very quickly and it will also be possible to save a replay of your exploits or to replay the battles at will. Moreover, even if a quick combat option is available before launching the assault on an enemy (which amounts to passing the fight by letting the game decide the winner based on the statistics of the two armies) we will have quick to have fun doing each battle, if only for fun or to enjoy the show since if technically this Warhammer 3 does not break three legs to a duck, artistically it is more than successful. The units are faithfully represented on the screen and benefit from rather neat animations, the spells and other pyrotechnic effects sweep the screen offering a nice spectacle. Then anyway, we’re not going to lie to each other, it’s rather funny to see thousands of creatures getting on their faces. Moreover, despite the large amount of elements, the game remains rather stable even if it requires a rather hefty machine to push the options to the maximum.

READ :   Images for Made in Abyss: Binary Star Failling into Darkness

One god, 8 factions and all-out war

Once all these basics have been assimilated, all you have to do is get started in the big piece of the game, its campaign mode. 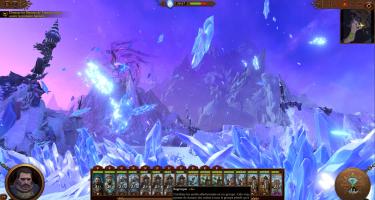 In total, 8 factions are playable, all of which have their own specificities. Here, the differences between the factions are noticeable at all levels. Already, if they all have the same objective, their paths are totally different as well as their relations with the other kingdoms. The course of events will therefore not be at all the same from one action to another, as will the ends which are also very different. At launch, 8 scenarios will therefore be available, for as many playable races.

We therefore find Kisleva faction living in the north, a kind of mixture between Russian and Norse mythology, the Great Cathayan empire with units that can turn into dragons, rather here inspired by Asian legends, and the Tzeentch, a race of anthropomorphic creatures using subterfuge and magic to sow confusion in minds and wage effective psychological or diplomatic wars. There is also the Slaaneshhellish monsters whose credo is torture and perverted desires, the Nurgle big nasty critters that proliferate disease in opposing troops, the Khorne, ancient demons as brutal as they are effective in combat. Finally, to these 6 factions are added two other special clans: the hordes of Chaos Daemonswhich are directly related to the prologue, and the Ogre Kingdomsa brutal race that mostly plays aggressively.

The Demons of Chaos, great champions of this opus 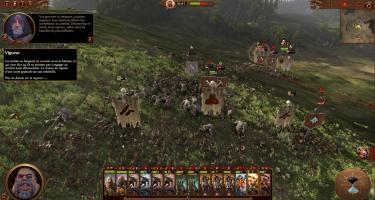 Yes the Ogres are left out here, it’s only because they’re not actually part of the original game. This race is indeed offered for those who have pre-ordered the game or who buy it during the first week. After this time, the Ogre Kingdoms will be offered as paid DLC. A content policy that does not lack audacity and that Total War players unfortunately know only too well. Moreover, small parenthesis, we will also note the total absence of blood or dismemberment during the battles, a point that we note here since certainly subject to a future DLC as was the case for the previous opuses. We are not going to lie to each other, a policy as aggressive as this clearly has no place in 2022it might be time for Sega to review its copy.

On the other hand, the Chaos Daemons, the main race we played during the test, are indeed part of the base game, but if I talk about them separately it is for the simple reason that this species is drastically different from all the others. , and even what has been done so far. Why? Well because it is certainly the most malleable and versatile faction of all, and at the same time offers the most extensive gameplay.

What differentiates them so much is having a warlord (your main character whose name we will deliberately keep silent) who has neither allegiance nor pre-established relationship. You and you alone decide which path to take, as long as it is connected with chaos and devastation.

All races are fun to play 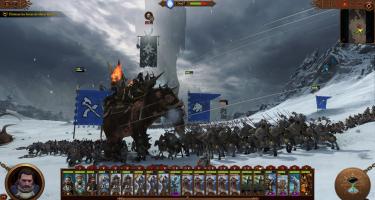 As a result, your leader will have access to all the units, equipment and skills of the void races (Khorne, Slaanesh, Nurgle, etc.), which offers a host of possible strategies both during the decision phases and in combat. . A real plus which at the same time gives a lot of replayability if only with this faction. For this test, I was able to do their campaign three times without ever opting for the same approach since by accumulating a special resource, the Demonic Glory, it is possible to access different allegiances which confer bonuses and exclusive equipment in addition to offer new affinities with other factions. And if the decision-making options are very different, it is especially in combat that this clan shines since it is able to call on a large number of different units. I swear to you that making an army composed of demons, children of the plague and slaanesh slaves has its small effect and certain combinations are even formidable.

But overall, after having touched a bit on everything, all races are fun to play, except maybe the Tzeentchs which are a bit behind since they have too few units and have “brain flipping” based mechanics which are not that big of a hit, although their in-game impact can also be daunting if the techniques are well mastered.

A wide choice of gameplay 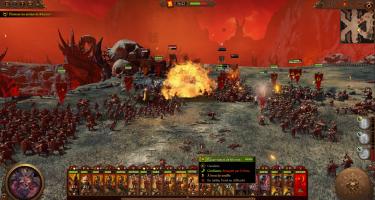 In all cases, the campaign continues, especially since it is regularly embellished with random events, sometimes funny dialogues and a large dose of strategy. As it stands, this Total War Warhammer 3 has a generous gameplay offering and can already guarantee hundreds of hours of play to amateursthanks to solid replayability. Especially since the campaign can also be done in multiplayer and even breaks free from turn-based rules by offering players the possibility of making decisions simultaneously. Next to that, a battle mode is also present and allows players to compete on the battlefield to climb the leaderboard, or to simply rub shoulders with the AI ​​in different difficulty modes.

On the other hand, even if it is a brand new title, it is difficult to say that we cannot play other factions, in particular the Nation of the Dwarves or the Skaven which we nevertheless come across in game and which were playable in Warhammer 2. Or perhaps Sega and Creative Assembly are preparing to merge all Warhammer as was the case before, in which case we would be holding here a real steamroller in the strategy game genre. On the other hand, if races already existing in Total War Warhammer were to arrive in paid packs, it would be bad. But when we are sold bloody effects in DLC, I tell myself that we are closer to that, it’s a shame by the way.