It will be long overdue. In development for almost eight years, Tunic immediately caused a sensation with gamers when it presented itself to the general public at the Xbox conference in 2018. It must be said that with its crisp little face, this Zelda-like assumed and colorful featuring a little fox who thinks he is Link had great assets to seduce. A promising title on paper and we can now confirm it, the Redmond company had a flair and got their hands on the console exclusivity of one of the best indie games of this beginning of the year. A captivating and addictive title in its own way.

A beautiful love letter to the old Zelda 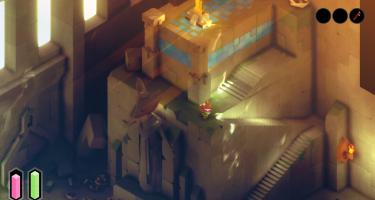 It all starts on a beach. A fluffy fox in a green tunic wakes up puffed up in the wind and deprived of any object. We don’t know what he’s doing there, who he is and what he should do. We advance blindly in a shimmering and verdant setting. We open a chest, then two, we find a stick as a melee weapon which is quickly exchanged for a sword and a shield. The hours pass and we finally begin to understand, more or less, the stakes of this cryptic story, its universe and the mythology of places that manage to create surprise. Don’t be fooled by her angel face, her cute 3D polygonal finery and her character’s cute face, the game depicts a sadder and darker universe than it seems.

Don’t expect a told or explicit story in Tunic. There is no dialogue, the few words scattered here and there are in an unknown dialect. It’s all about observation, interpretation and perhaps even deciphering. A mysterious dimension that brings real cachet to the game, which does not hesitate to go against today’s standards by offering almost only texts translated into unknown runes. Only essential information is in our language. This lack of indications does not disturb, quite the contrary, it is one of the attractions of the game. It is reminiscent of the first The Legend of Zelda, which let you discover the world by experimenting with new things and based on the booklet. You know those manuals we had in our game boxes that had the key guide, maps, story art, and hints? This is a component in its own right here. You will never be caught by the hand, even if Tunic adopts a system of pages of notices to recover to understand the mechanics as you pick them up, but also to have tips and clues on how to proceed. And who knows? Perhaps the pen annotations of Andrew Shouldice, creator of the game, hide secrets to decipher? In this, Tunic is a real love letter to his mentor.

Strolling through Tunic is a real treat, but not a countryside stroll 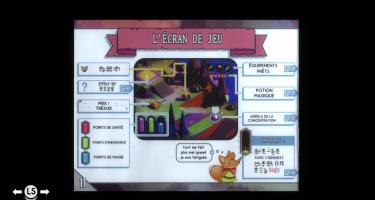 So you can walk through the environments as you see fit, in any order you like. You are free to move as you wish, but the progression remains conditioned by objects. Example, at some point, you will absolutely have to get your hands on the sword to cut bushes and survey a new area. A manipulation that we find once or twice later, but the freedom of action is very real despite short, more interventionist moments. The areas are not large, but open enough to make you want to get lost, look for secret passages, unlock shortcuts or find those sacrosanct chests that allow you to obtain oh so useful and precious objects if you doesn’t want to farm enemies to buy them. Exploration is very well rewarded and with its artistic direction to die forits shimmering color schemes and its chillax soundtrack, this small isometric 3D production exudes a bewitching magic that makes you want to dive into its universe again and againe. Strolling through Tunic is a real treat, but not a countryside stroll.

A choupi and demanding souls-like

If it takes its inspiration from Zelda in terms of exploration, Tunic is above all a souls-like at heart. Anyone who is not warned will discover the unsuspected requirement of the game at his expense. The ruins that we explore are populated by hostile, aggressive and certain devious creatures from another time. You will often die, it is a fact. In battle structure, those who bled Bloodborne, Elden Ring and the like are on familiar ground. We are talking here about parries and dodges which rely on an oh so precious stamina gauge. If this green indicator is empty, it turns red, a sign that the little fox is exhausted. A status that reduces his balance, prevents him from blocking attacks with his shield and which above all pushes him to take 150% power blowouts. It hurts, and bad management of the stamina bar can clearly change the outcome of a fight. 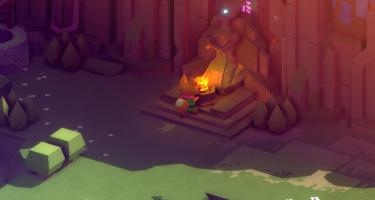 Each defeat brings you back to the last statue where you prayed, the only way to recover all of its health and mana. Your stock of healing potions is like new, but all the defeated enemies come back around as if nothing had happened too. Do not expect to farm to gain power and run over your enemies, there is no level to grab here. The only way to get stronger is by collecting items to give as an offering to one of the deities in the game. You were told that chests were sacred. An intelligent progression system, which pushes players ever more to explore and forces them to face enemies stronger than themto analyze their patterns as well as their weaknesses in order to overcome them.

Pure and hard souls-like with its own personal touch

Difficult small fry at first, but which becomes less intimidating as we unlock new elements of our arsenal. We don’t want to quote them so as not to spoil the surprise, but it is varied enough for Tunic to renew itself, both in terms of combat and game mechanics. That said, don’t expect to equip everything that comes to hand. Only three slots are available, one for each action key, knowing that the classic health potions and the shield are counted separately. It will be necessary to make choices and adapt to situations, because it is mission impossible to change a weapon or an object during combat. Add to that liabilities in the form of cards on which enigmatic symbols are scribbled. It will be imperative to try them to try to understand the bonuses, even the penalties, that they confer. Another solution, try to find an adequate manual page and decipher it (good luck). 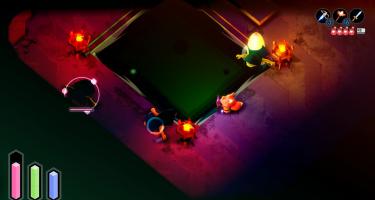 Short pure and hard souls-like with its own personal touchbut Tunic isn’t as picky and picky as the license that created the genre. We are talking here about demanding confrontations but which remain accessible and which are above all engaging. The boss fights will take a few tries, but they aren’t insurmountable on their own. They remain none the less difficult and exhilarating enough to reward us with THE feeling of satisfaction expected when we succeed in defeating them. If in themselves these duels are quite uneven, with some clearly standing out in terms of both design and patterns, all are thorny in their own way.

A demanding but accessible title

Everything could have been of exemplary fluidity if there was not this damn camera and this imperfect lock system. Because part of the gameplay lies in this ability to position yourself so as not to turn your back on your opponents, to engage this focus mode which targets an enemy and makes it easier to gravitate around him, to dodge and block his blows with more ease to attack him better on the flank. It works well with bosses most of the time, as long as they don’t have weak spots that you can lock. Because as soon as there is more than one opponent or another component to target, the mechanics struggle to convince. It’s an obstacle course to select the desired enemy, the camera freezes, goes to focus on a mob you don’t care about and you find yourself doing what you shouldn’t: be with your back to your assailant(s). . 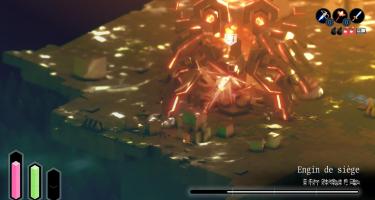 It is sometimes frustrating, often penalizing for the little that we are surrounded. A real wound during one of the final fights, necessary to complete the story. And we don’t even talk about it if you want to play the keyboard / mouse combo. There has been improvement with the updates that have punctuated our test phase, but it is still not very intuitive, Tunic being clearly designed to be played with a controller. Another complaint, mob AI is still perfectible. It is not uncommon to see some of them standing there waiting gently for someone to come and take them down.

Tunic also exceeds our expectations for durability.. What was supposed to be a short experience can keep you guessing for at least ten hours, depending on the players’ ability to defeat the bosses. And as the game is generous to the end, it will take a handful of extra hours after completing the main plot to overcome the last secrets for which you will have to rack your brains, really. And this is where a whole new dimension of the game begins, and what a facet! We can’t say more, just that Tunic excels in the art of creating a mystery to draw you into its universe.