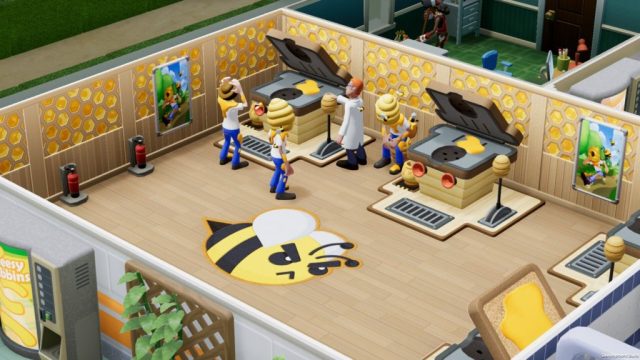 New locations, new diseases and an ambulance management system to dispatch around the city arrive in this new paid DLC for the hilarious Two Point Hospital.

New DLC for the excellent Theme Hospital tribute simulation game, Two Point Hospital. The new additional content will be available on PC via Steam and the Microsoft Store for €8.99 on March 15, 2022. Before its official release, pre-orders even show it at -10%.

In this new content pack, a new game mode is announced. Indeed, Two Point County had a genius idea by launching on the roads and in the air new innovative but unconventional ambulances. You will be able to deploy your services on the map according to the type of emergency.

Spend lavishly to deploy your new shiny road vehicles like the Gigambulance, and avoid traffic jams thanks to the Elevatrines which transport the sick by air.

Two Point Hospital: Healing Express will also explore three new lands and will add three treatment rooms unpublished for 19 pathological news including the Hive Mind that you can see in the video and which consists of crushing the head of the patient, locked in a hive, between two slices of toasted bread, thanks to the new Tartinomiel.

READ :   Pokémon Legends: Arceus will take up little space on your Nintendo Switch