Upstream the private alpha that will launch on May 19 on Warner’s servers, the publisher invited us to an exclusive presentation and three days of internal testing on a well-advanced build of its MultiVersus. The new brawler, by its appearance and its orientation, wants to fight in the same category as Smash Bros, so it is only natural that it must set the bar quite high. And the least we can say is that hopes are allowed. 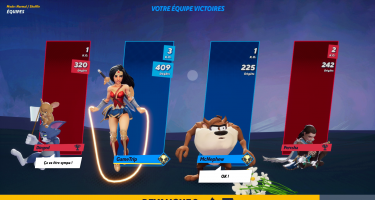 Let’s start by specifying that it was without any expectation that we discovered this private technical alpha. Indeed, the last to have tried to box against Nintendo, it was Nickelodeon All-Star Brawl, a coop fighting game with many licenses but of passable quality and that we finally quite quickly forgot just like its editor obviously. Suddenly, when Warner Bros announced to do the same, the hype was not as great as expected. And yet, the first cast was enticing. Now that we have this title in hand, we can confirm it: on the fan service side, it’s very successful. Batman, Sammy from Scooby-Doo, Arya Stark from Game of Thrones, Bugs Bunny… If for the moment the roster is made up of 15 people and ultimately quite a few licenses (DC Comics, GoT, Looney Tunes, Adventure Time, Steven Universe , Scooby-Doo and Tom & Jerry), the possibilities are ambitious (the studio also has Harry Potter, Matrix or Mortal Kombat…) Visually, we end up with 3D cartoon graphics very close to a Fortnite. Besides, we feel a huge inspiration from Epic’s Battle Royale (also free-to-play) in various parts of the game: the graphics, the menus, several sound jingles, the rewards…

Fans will be delighted 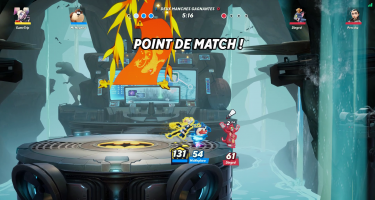 Already, during the private presentation, the trailer had given us a first feeling Fortnite, with its mixture of grandiloquent action despite the cartoon side under Unreal Engine, and valves well sent on music as epic as Epic himself. The opportunity also to see that the references are there. Superman who launches an “it looks like a job for Superman”, Bugs and his famous “What’s up Doc?”. All enhanced by original voice actors, most of them cult characters. In the 5-star cast, we will regret for the moment having only the Harley Quinn New 52 version of the comics. We hope that an Arkham or 90s anime skin will arrive soon (spoiler: yes).

Jon Diesta, art director on the game, has also confirmed to us that it took a lot of inspiration to create a design faithful to the characters and also to ensure the presence of several license locations, such as the island of Themyscira from the Amazons or the Batcave from Batman. Character designs and backgrounds also inspired their skills and forms of combat. “Where Taz is a close combat character, Velma from Scooby-Doo is more of a support character, she doesn’t have a physical attack, she uses her head to solve mysteries so it shows in the gameplay.” On his side, Tony Huynh, co-founder of Player First Games and game director of the game, announces the presence of renowned actors such as Kevin Conroy who takes over the voice of Batman, Maisie Williams who doubles herself on Arya Stark, or the official voice of Sammy. 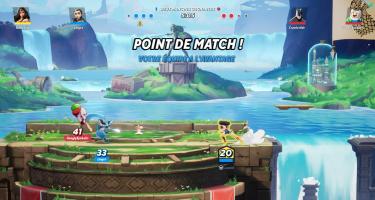 In game, the surprise is significant. Tony bragged to us about 2v2 announcing that it “pushed the barriers of brawler, with a strong focus on co-op”. The game must make it possible to “make surprising associations” and promote teamplay. And, he didn’t lie. After going through a quick tutorial that allows you to unlock Wonder Woman, we discover 15 characters who all have a class (hitter, support, assassin, mage or tank), a style of play (vertical, horizontal or hybrid) and 4 asset slots to fill in to improve your skills. Even for someone who has never got their hands on a brawler, getting started is immediate. Each fighter has a normal blow and a secondary, which he can associate with a direction (up, sideways, down). In addition, most of the characters can also perform different combos in the air, which therefore gives rise to sets of up to 16 different moves and all inspired by the original comics, films or series. Finally, everyone has a very practical passive skill and a charged attack after a few well-felt hits. Quite surprisingly, we also tested the game in mouse keyboard and it is easy to play in this form! 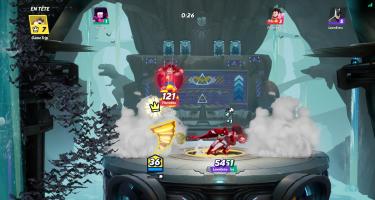 As with other games of the type, the goal is to knock the opponent off the screen. In MultiVersus you can play 2v2, 1v1 or free for all, with or without bots. You have to knock out the opponent 4 times to win the game. To do this, each hit increases a gauge displayed under the character (similar to the percentages of Smash Bros) and when this increases, any damage inflicted sends it further and further to the edges of the screen. And, this is also where the famous important teamplay comes into play since the skills of the players bring a real freshness. For example, the Dog-Reindeer (a new character created for the game) has a mental link that allows him to cling to his teammate to prevent him from falling outside the area and losing a life, Diana can activate a protective aura that protects her teammate or use the Lasso of Truth to bring people back to her. Without counting the few references and amusing winks like Batman and his bat-grapple to approach an enemy, Superman and his super breath to freeze a hero, Sammy who digs up a sandwich and can swing it on people, or Tom putting Jerry on a rocket and sending it exploding at the opponent.

In the end, each match can be a unique combination between characters, assets and player level

All this is therefore combined with assets that improve attack, defense or simply add some charge or speed bonuses to the team. Three slots are available for team perks, an additional one for the perk unique to the character. In total, each character will be able to unlock 8 different assets and then choose, depending on their teammate and the team’s strategy, which ones to equip during the selection phase before the start of the fight. And, here again, everything has been thought out for teamplay by trying to balance the overall picture, since the tank characters have, for example, no attack advantage in the set. Ultimately, each match can be a unique combination of player characters, assets, and level. It will also be possible to “train” them, that is to say, to improve them to make them more efficient. Moreover, these assets are unlocked by playing since each hero has a line of progression of 15 levels which gradually offers items including emotes or advertiser packs. 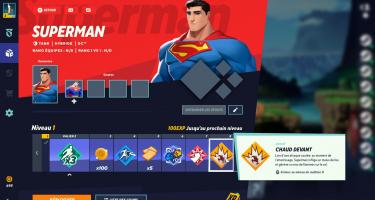 Indeed, like any good free-to-play, the player will be able to customize his environment to put up a banner when a character is ejected, do a little taunt dance after a victory, change the skin for certain fighters (Batman in Samurai, Harley in Task Force X) or define who will scream in the microphone during combat. Let’s not forget the battle pass, which offers 50 free and 50 paid levels, again to unlock exclusive items, Xp boosts, ingame currency and character variants. By the way, speaking of currency, for the moment we see two of them: the gold which will be necessary for any purchase of new characters (two thirds are unlocked at the start of the game) and the toasts, which you can give to your opponents at the end of each game and we still don’t know what it’s for. Two options are not yet available in the menu, including a shop, to be seen in the long term.

It must be said that by playing really teamplay, we feel a difference 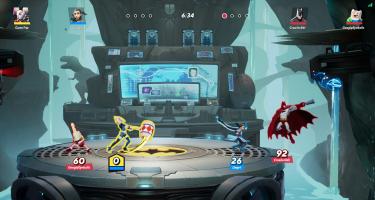 For the moment, the balancing still needs to be reviewed in places. The tank characters are clearly cheated (or so I’m too strong, world top 15 after 3 days maggle), especially Wonder Woman. Taz, who is a puncher, is also a monster of power as soon as you go up in his “levels of mastery”. And it’s not even a question of continuously bashing the same keys, since the gameplay adds this great idea of put a cooldown when you chain more than 7 times the same move, rendering your attack nearly powerless. It must be said that by playing really teamplay, we feel a difference. On the character class side, this is also something to check in the long term so as not to upset the meta. There are currently two tanks (Superman and Wonder Woman) which is quite enough. Moreover, to experiment with ways to play, a Lab is accessible at any time (even during matchmaking) which acts as a training ground. Note that you can also create your own game by modifying almost all the possible parameters (teams, ejections, times, traps, maps). We have not been able to test it for the moment, but the game also offers a ranked mode which will undoubtedly be quickly taken by storm. 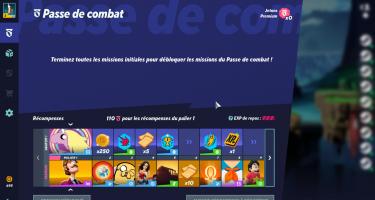 A last word on the graphics and the sound environment finally: as said above, the artistic direction approaches a Fortnite, with characters with strong and cartoon features, and sound effects and music that also resemble the Epic game (also mentioning the selection jingle that makes you think of a Wii Sports call sign ). It’s quite beautiful, it’s clean and that’s what we expect from the game. The music is all the more fun as it is also from the inspired series. It’s a real pleasure to hear the theme of Batman during his game. Some parts of scenery are destructible and bring a little nervousness to the levels which can already be played as much on horizontality as verticality with often suspended platforms. And then, the sound design is successful: hear Tom scream when he is taken out of the screen and the characters winnow each other during the fights, adapting to the character in front (Superman who says “Not now Batman” when ‘he gets hit by the bat without powers…), it’s cool, especially when you know that these are the original voices for the most part.

READ :   SNK is working on a new game under Unreal Engine