We tested the new PlayStation Plus and its three levels, launched today on PS4 and PS5. A quick overview of what changes, what remains and what disappears.

As expected, the new PlayStation Plus formulas are now available in France for PS4 and PS5 players. Sony Interactive has just launched its new subscription program which offers more content and more to fans of the brand. More than 700 games are now available in the catalog according to levelsPS Plus Essential, PS Plus Extra and PS Plus Premium.

At launch the catalog includes titles like Ghost of Tsushima Director’s Cut, Marvel’s Guardian of the Galaxy, Marvel’s Spider-Man: Miles Morales, NBA 2K22 or Red Dead Redemption 2. Stay connected to VGR to know the complete list of titles in France, which arrives today on our site.

Among the classic games available on PlayStation Plus, let’s mention Ape Escape, Siphon Filter or Tekken 2. As a reminder, here are the three new tiers:

Globally provides the benefits of your old PlayStation Plus account:

If Sony tells us that “this level does not include any changes for players who were already PlayStation Plus subscribers”, obviously, only two games will now be offered per month, and no longer three, while the PlayStation Plus Collectionwith many hits offered to subscribers, has disappeared.

Overall, this is where we find the PS Plus Collection, included in the new catalog improved to the “Game Pass”. However, Sony had already made it clear that it did not want to do day one with its exclusives.

Note that Ubisoft+ Classics games are also included in the offer.

Here, it’s the old PS Now that makes its appearance in the offer, oriented cloud gaming and backward compatibility. So you can also play these games from your PC.

You can find our full FAQ on the new PlayStation Plus at this link.

For subscribers who already had an account, the update is done automatically to the nearest level (Essential or Premium if you had PS Now). However, the price is not the same and your account will now be debited with the new amount as we explained here, even if you had taken an offer.

In other words, if you had bought 12 months in January at a reduced rate, making you pay only €4 per month in fact, from this month of June, you have the obligation to complete the 6 months. remaining… at €8.99 per month. More expensive than directly purchasing a new offer today. 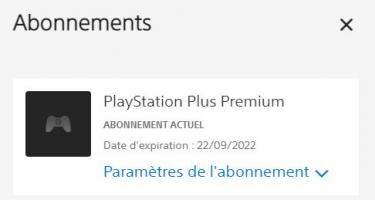 Finally, if you take a PS Premium offer, you will be surprised to see that a PS Now subscription has been activated in your account (which shouldn’t change anything because the program has been removed). Some small errors still seem present on some subscriptions elsewhere. For example, when trying to play a game available from PS Extra with a Premium account, I was told that I had to “upgrade” to the level below mine…

We will continue to test the program, including cloud gaming and retro in the coming days to offer you other detailed tests…