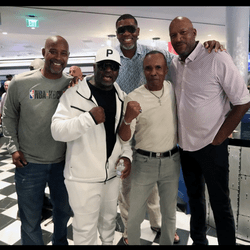 Everyone knows: there are many celebrities who love casino games.

That’s probably why the Hollywood Casino in Detroit’s Greektown neighborhood in Michigan recently hosted a charity blackjack tournament that attracted about 50 celebrities.

We take a look at this competition organized by the Mark Wahlberg Youth Foundation.

On Sunday, August 28, a charity blackjack tournament was held at the Hollywood Casino at Greektown. The event attracted nearly 50 famous sportsmen and other celebrities who will be participating in a golf competition in the next few days.

Among them were boxers Evander Holyfield (the only four-time world heavyweight champion in boxing history) and Sugar Ray Leonard (named boxer of the decade in 1980). There were also the Wahlberg brothers: Donnie who was a singer in the band New Kids on the Block and Mark who became a successful Hollywood actor.

It is moreover the latter who organized this tournament via his Mark Wahlberg Youth Foundation. This one recovered the earnings of the celebrities to give them to different charities. In the past, it has made donations to the Beaumont Children’s Hospital.

A competition won by Donald York

The famous tournament that interests us through this news started at 10:30 am at the Hollywood Casino at Greektown . In addition to the fifty or so celebrities, the VIP members of the establishment could also take part in the competition which had a buy-in of $250 and a total prize pool of €50,000 to be shared between all the winners.

The winner was 68-year-old Donald York. He has been playing blackjack for over 40 years now. It was with a huge smile that he received a giant check from the hands of boxer Evander Holyfield.

This is not the first time the Hollywood Casino has hosted this kind of charity event. Over the past 5 years, it has raised between 2 and 3 million dollars that have been donated to the community in various forms.

Some information about the Hollywood Casino at Greektown

Opened during the year 2000 as the Greektown Casino-Hotel, the Hollywood Casino at Greektown was initially majority owned by the Chippewa Tribe of Indians of Sault Ste. Marie. Then, due to the global economic crisis of 2008, it went bankrupt and was sold to Vici Properties. That’s when it changed its name.

Accommodating 400 rooms or suites, the establishment offers an area of 9,300 square meters dedicated to games. Within it, there is a poker room, a sports betting room, more than 3,000 slot machines and tables dedicated to blackjack, craps, roulette, baccarat and various poker variants.