When the Germans from the small indie studio Monokel introduced us to White Shadows for the first time last year, the title aroused my curiosity. Between big vibes reminiscent of Limbo, his committed approach which hits on strong subjects like suicide or mistreatment, and a dystopian world crammed with crappy metaphors, the trip had great promises. Yeah, he had …

A crow without its calendos 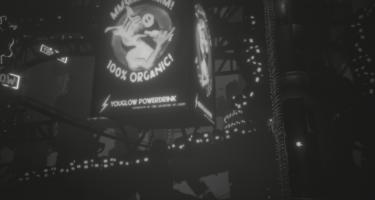 Projected into a world as dark as its artistic direction, White Shadows sends us into the feathers of a humanoid crow living in the shallows of a crappy tech-savvy megacity, ruled with an iron fist by a sinister Ministry. Without being explained to us the why and how, the young crow sets out in search of what seems to be her freedom. By rushing straight ahead, she decides to cross with full speed the oozing entrails ofa city that will not stop harassing her throughout, in the true sense of the word.

Yes, since not content with stuffing the heads of its “inhabitants” with a great deal of propaganda, the entire city makes a point of destroying the crows, seen as parasites, carriers of the evil eye, of the small fry to be eliminated. . The entire game then turns into an executioner. Nothing to do here with its difficulty, totally non-existent, but it is the entire city that oppresses us and our condition as a young bird. Targeted by propagandist spots, stormy posters or even loudspeaker announcements that puff out horrors that are difficult to understand, as it screams. The inhabitants, an armada of zombified pigs, are herded like animals and reduced to the state of outright slavery. Crushed by their government and wrung, literally, to the core. Many horrifying sequences also dress the backgrounds. 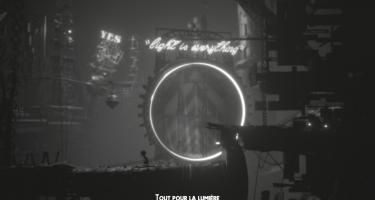 In more than one way, White Shadows is anxious. The studio gives us hardly any information on the lore, we are just as lost as our Crow and we take all the surrounding horrors in full face as we advance. It is rather effective and environmental storytelling, based on terrifying metaphorical images, has its effect. The artistic direction also plays a major role in the stifling atmosphere that emanates from the software. White Shadows uses only three colors: black, white and grays. As a result a dark and tortured universe that takes guts.

The city itself is nothing but a heap of disproportionate metal structures, the buildings intermingle in veritable mazes of pipes where a whole bunch of automated machines creep. Aesthetically, White Shadows is successful, there is nothing to complain about, even if we will rail on the large abundance of visually too explicit allegories which, in the end, somewhat defy this cryptic turn of the narration, especially as the subjects discussed are never in-depth. The desire to point the finger at the evils of current society, the deviations of humanity, as well as to touch on powerful subjects, is there. But it is a little too academic and far from being as fine as teased by the studio, despite the presence of some sequences, in particular of the actions that will be carried out, which come to qualify certain remarks. Pity.

A dark and tortured universe that takes guts

Too many messages kill messages 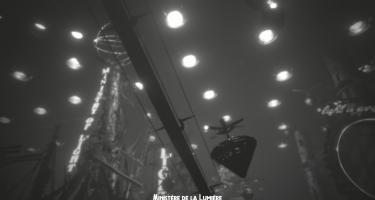 Always in this desire to bring its contemplative and metaphorical aspect to the fore, White Shadows smoothes its gameplay to the extreme. Minimalist softs that focus absolutely everything on their narration and their atmosphere, we have already seen some, and very good ones even, but White Shadows misses the mark.

If the lack of difficulty is a choice, just as some games are inherently difficult, the gameplay and the puzzles, and even the staging, are far too refined to add pizzazz, and you end up getting bored. a chouïa. A shame for a game that ends in one go in about 2 hours. Our chick is a bit soft in nature and reacts quite heavily, sometimes giving the impression of input lag, when it is not. And although during her progress she is equipped with a pinch of skills – and I can not say more under penalty of spoiling some narrative effects – nothing saves her and she will continue to drag her foot until the end. 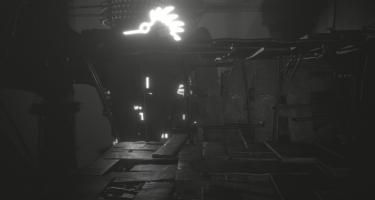 The level design and the puzzles do not help to stimulate us either. With a 100% 2D scrolling, we move straight ahead, playing somewhat with the verticality offered by the architecture of the city, but that’s about it. We will jump on two or three platforms from time to time, we will push a pair of crates and we will climb a lot of ladders, but that’s it. The puzzles for their part, also devoid of difficulty, do not even try to make us think and are solved in two steps-three movements. This is frankly a shame, since many similar works have managed to link all these elements and, even if it means being inspired by them, White Shadows could have gone all the way to get the best out of them.