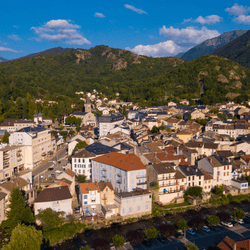 Saint-Amand-Les-Eaux, Enghien-les-Bains or Ax-les-Thermes: here are the names of some French cities that host a prestigious casino on their territory. As their name suggests, they are thermal spas, which is very common in France.

Some of our readers are probably wondering why a lot of gambling establishments are located in this kind of water city. This is the interesting question that we will answer in the following article.

An idea from Napoleon I

In the United States, there is Las Vegas, Reno or Atlantic City. In China, you have to go to Macao to play at the casino. On the other hand, in France, you can choose between Divonne-les-Bains, Forges-les-Eaux or Cransac-les-Thermes. Why on earth is it often spas that host a gaming complex in France? To answer this interesting question, we have to go back in time.

Before the 19th century, games were not allowed in France. Those who wanted to gamble had to go to illegal gambling dens which were not taxed by the state. This is the reason why Napoleon I had the idea to legalize casinos in order to recover interesting tax revenues.

When they finally became legal in 1806, they were reserved only for spas.

The idea was to limit the number of them first of all but also to target mainly the well-to-do. Indeed, these water cities were essentially frequented by the upper middle class and the aristocracy. It is from this period that the current over-representation of spas among the cities hosting casinos dates.

At present, there are still casinos in France in other cities such as Deauville, Cassis or La Grande Motte. It is that little by little the seaside resorts and the climatic stations were also authorized to accomodate such complexes, a little for the same reasons.

But what about the Casino Barrière in Bordeaux, the Pasino in Aix-en-Provence or the Casino Le Pharaon in Lyon? Well, the law has simply been extended. It is now possible to open such establishments in tourist cities with more than 500,000 inhabitants that have a national theater scene. Indeed, the casino’s income must allow to finance the lyric art.

So of course, there is one notable exception to this: Paris. Indeed, casinos are still forbidden in the French capital thanks to a law dating from 1920. However, after the end of the Second World War, it was still possible to go to gambling circles.

Following their prohibition, gambling clubs appeared in 2018. Among them, we can mention for example the Paris Elysees Club, the Imperial Club Paris, the Punto Club or the Club Circus.