Xenoblade Chronicles 3 has finally revealed itself up and down during a livestream and promises an adventure as rich as it is generous.

If we’re only talking about Final Fantasy 16 lately, we certainly shouldn’t forget that Nintendo also has a very big RPG coming, the highly anticipated Xenoblade Chronicles 3. Moreover, the latter had the right to a Nintendo Direct just for him and took the opportunity to share new images with us.

An open world that promises to be particularly vast

Always as colorful, the software will however deal with much less watered down subjects such as war, sacrifice, and even mass genocide.

In Xenoblade 3, as in previous games, we will be able to play several characters. The presentation highlighted the main protagonists: Noah, Eunie, Lanz, Mio, Taion, Sena. Makeshift friends, once enemies, who will be forced to cooperate by force of circumstance, all considered fugitives to be slaughtered by their respective kingdom, Kenes and Agnus.

The software promises a rich and particularly vast universe in which it will be possible to move freely. The environments promise to be diversified and drastically different, all having their own vibes and enemies. Besides, the game will also have a day and night cycle influencing the world in which you will evolve. Thus, specific events and monsters will only appear at specific times.

Just like in previous games, battles will trigger dynamically and take place in semi-real time. If your characters will obviously have favorite classes, it will be possible to modulate them as you wish by choosing from a panel of specific jobs. We thus find defensive classes such as the Zephyrfocused on counters, or the Heavy Guardiana pure and hard tank, but also support jobs with theHealer Gunnera care specialist and the Tactician, able to inflict powerful debuffs on his opponents. Obviously, the DPS will be present with theSwordsmanthe assault class par excellence capable of creating the tempo in combat or even the‘Ogrethe most brutal class in the game.

Of course, the Arts (skills) will always be present and in large numbers. In addition, you can be accompanied by several non-playable heroes also endowed with a specific class that it will be possible to mix with yours. Without having the game in front of you, this system seems a little fuzzy, but on paper, it promises to offer huge customization possibilities.

READ :   Ubisoft will reveal its next Assassin's Creed in September

Finally, your characters will have the possibility of merging with each other to become Ouroboros, powerful destructive entities which, again, will offer a wide range of strategic options for combat.

A JRPG that promises to be daunting

In sum, this first real preview of Xenoblade 3 promises once again a disproportionate software and stuffed with content. In combat alone, everything looks particularly dense. But as a bonus, the software will embed a crafting system, dynamic character development with multiple possibilities and social interactions will also be of paramount importance here. You will also have access to a diagram of your relationships with the different characters and NPCs you meet so you don’t get lost.

Xenoblabe Chronicles 3 is expected exclusively on Nintendo Switch from July 28th. The app will also have the right to a collector’s edition and a season pass. 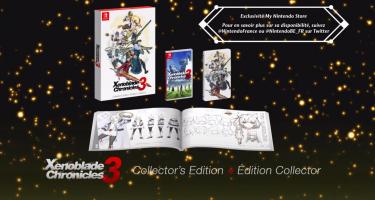