Scheduled to arrive in 2022 on PS5, Ys 8 now has a precise release date with a new video.

While Ys 10 is under construction, the eighth episode of the saga originally released in 2016 on Nintendo Switch and PS4 will very soon join Sony’s last generation console.

A fall arrival for Ys 8

Ys 8 will arrive in the fall of this year 2022. We already knew this information. However, we were missing a little date to write in our calendar. What we can do now since NIS America has just lifted the veil on this element.

And so, the action RPG will be available to European PS5 players from November 18, 2022a few days after the American public. Several editions of the game are already available for pre-order. There is, of course, the standard one, but some of you might prefer to go for the Deluxe edition which offers extra content such as a mini artbook or the game’s OST… unless you are attracted by the most complete edition. Indeed, the Limited will have in its possession the content shown in the image below. 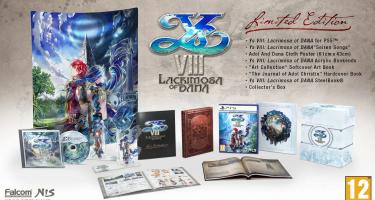 On the heels of the date announcement, NIS America has also released a new video of its game. Here it is:

READ :   Forspoken on PC: One second to load certain scenes in the game

No mention of an update for the PS4 version was made.