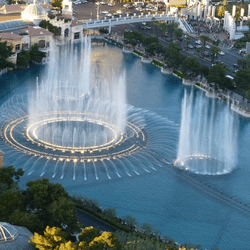 On Wednesday, March 30, 2022, the Formula 1 World Championship announced that it would now travel to the southern U.S. state of Nevada each year for the Las Vegas Grand Prix, starting in November 2023.

For the first ever race, MGM Resorts International plans to build a grandstand over the man-made lake at its prestigious Bellagio hotel-casino on the Strip to provide one of the world’s most exclusive sporting experiences.

During August, MGM Resorts International Chairman and CEO Bill Hornbuckle said his group plans to buy $20 million to $25 million worth of tickets for the 2023 Las Vegas Grand Prix.

With a rate like that, customers have to be offered an experience that lives up to it. That’s precisely why the operator wants to build a grandstand over the artificial lake at its Bellagio hotel-casino that will set new standards for watching sporting events.

READ :   Playtech places its live games at 888 in New Jersey

In addition, it will also offer a 24-hour celebration worthy of this internationally renowned show. An ambitious program!

A project that faces a lot of discontent

The announcement of the creation of a grandstand above the artificial lake of Bellagio does not seem to have pleased a lot of Internet users. Indeed, a lot of them think that it will prevent thousands of visitors of Las Vegas from enjoying the famous fountain show of the hotel-casino.

Nevertheless, it is to be expected that MGM Resorts International group will make a lot of money thanks to the Grand Prix of Las Vegas.

For example, it plans to triple the room rates at some of its Strip gaming establishments. In addition to the Bellagio, these include the Circus Circus, the Mandalay Bay, the New York-New York and the Park MGM.

READ :   Towards an agreement voted by the dealers of the Montreal Casino

Recently, tickets went on sale at prices ranging from $500 for a 3-day standing room only pass to $10,000 for a Skybox Hospitality seat near the paddock.

For the record, a Grand Prix had already been held in Las Vegas in 1981 and 1982. However, the route at that time was limited to the Caesars Palace parking lot.