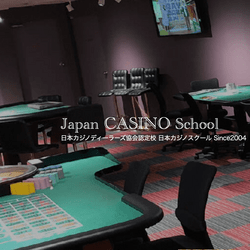 It has been several years now that Japan has been working on the development of several casino hotels on its territory. As a result, a school specialized in this field opened its doors, during 2018. Named Japan Casino School, it hoped to train the country’s future croupiers.

Unfortunately, as the project to open the gaming facilities was quite delayed, the school began to encounter difficulties in finding students. Recently, the school was forced to close its doors altogether.

A bankruptcy filing after only 4 years of existence

Shinzo Abe was the Prime Minister of Japan from September 26, 2006 to September 26, 2007 and from December 26, 2012 to September 16, 2020. During his second term, he sought to boost the economy of his country by developing tourism in particular. To do this, he fought to legalize hotel-casinos, despite the opposition of a majority of citizens.

In the end, it was during the month of July 2018 that the Parliament passed the famous law. The Japan Casino School then took the opportunity to open its doors. It had the ambition of surfing on the craze for this new sector by training croupiers in particular. Students were taught how to handle the equipment, whether cards or chips, and the rules of the main classics, including baccarat, blackjack, poker and roulette.

Unfortunately for the Japan Casino School, the development of gambling complexes in Japan suffered a series of delays due to a corruption scandal but also and especially to the international pandemic of the Covid-19 coronavirus. As a result, out of the hundreds of dealers that the school has trained, none of them managed to find a job inside Japan. So the number of enrollment gradually started to decrease. Then, a few days ago, it became official: the famous training center was finally forced to file for bankruptcy.

Only 2 projects left in Japan

Originally, the casino law allowed up to 3 gaming facilities to open across the country. More than 4 years after it was passed, not a single resort has opened its doors. Worse, the national government has yet to approve a single one.

This proves the loss of interest of the big international operators for Japan. In fact, Japan was supposed to become one of the main international casino markets, according to most specialists in the sector. Thus, prestigious groups were initially interested, including Las Vegas Sands, Caesars Entertainment, Hard Rock International, Galaxy Entertainment, Wynn Resorts and Genting.

However, they all withdrew due to the pandemic and the numerous delays in Japan in the implementation of the regulations.